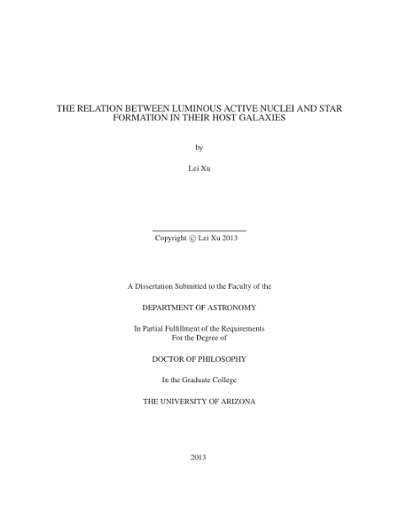 Studies of central black holes (BHs) in nearby galaxies revealed tight correlation between the BH mass the host galaxy bulge mass, indicating a link between BH and star formation (SF) in the host galaxy. Luminous active galactic nuclei (AGN) are powered by mass accretion onto supermassive BHs. Observations of the AGNs and the SF in their host galaxies are required to understand their relation and how they establish this BH mass-galaxy bulge mass correlation over a wide range of cosmic lookback times. This thesis presents a survey of 24 μm-selected luminous AGN and their host galaxies up to z ~ 3.2. It focuses on the foreground and background broad line (Type-1) and narrow line (Type-2) AGNs of 30 massive galaxy cluster fields with total survey area of 5.2 deg², using the multi-wavelength dataset from the ultraviolet (UV) to far infrared (FIR) from the Local Cluster Substructure Survey. The AGN sample is nearly complete to a 1 mJy flux cutoff at 24 μm, and is optical-spectroscopically identified. With this dataset and the accompanying MMT/Hectospec spectroscopy survey, the properties of AGNs such as BH masses, BH accretion rates, and total luminosities, can be readily determined. Particularly, the Herschel data (100, 160, 250, 350, and 500 μm) sample the FIR peak of sources in our sample, and provide constraints on the star formation rates (SFR) in the host galaxies. For the Type 1 AGN sample, most of the systems are at z > 0.6 with luminosities > 10^45 ergs/s. Out of the 205 Type-1 AGNs, 107 are detected in at least two Herschel bands. We use AGN, stellar, and SF galaxy templates to decompose their spectral energy distributions (SEDs) from the UV to the FIR, and estimate their IR SF luminosities, AGN luminosities, and their host galaxy stellar masses. The SED decomposition reveals that a high level of SF is ubiquitous for our 24 μm-selected Type-1 AGN sample. For sources at z < 1, the stellar components from SED decomposition provide direct constraints on the stellar mass. For sources at z > 1, the BH mass-bulge stellar mass correlation is used for indirect constraints on the stellar mass. We carried out a similar analysis on the 85 Type-2 AGNs and their host galaxies up to z ~ 0.8, out of which 55 are detected in at least two Herschel bands. We reach the same conclusion as for the Type 1 AGN sample. That is, 1) These AGN host galaxies are very massive, and the vast majority of these galaxies have specific star formation rates (SSFR) consistent with those of main-sequence, star-forming galaxies rather than starbursting galaxies; 2) Most of these AGNs accrete at a rate close to 10% of Eddington; 3) We also find a strong correlation between the IR luminosity of the SF component and the AGN total luminosity, for both Type 1 and Type 2 AGNs. However, we show that the correlation could arise just because the BH mass (and hence AGN total luminosity) and the SF are both correlated with the galaxy mass, rather than requiring a causal connection between the observed rates of SF and the nuclear activity.