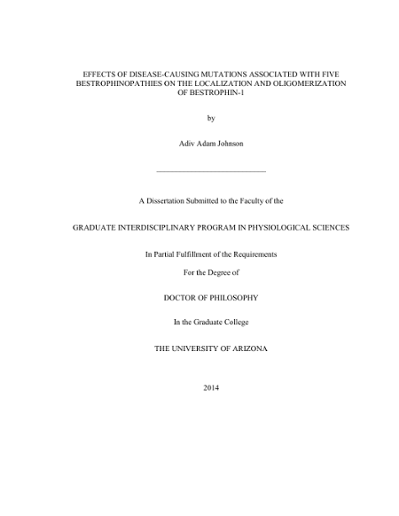 Mutations in BEST1, the gene encoding for Bestrophin-1 (Best1), cause five, clinically distinct inherited retinopathies: Best vitelliform macular dystrophy (BVMD), adult-onset vitelliform macular dystrophy (AVMD), autosomal recessive bestrophinopathy (ARB), autosomal dominant vitreoretinochoroidopathy (ADVIRC), and retinitis pigmentosa (RP). Little is known regarding how BEST1 mutations cause disease and why mutations cause multiple disease phenotypes. Within the eye, Best1 is a homo-oligomeric, integral membrane protein that is exclusively localized to the basolateral plasma membrane of the retinal pigment epithelium (RPE). Here, it regulates intracellular Ca2+ signaling and putatively mediates anion transport. Since defects in localization and oligomerization are known to underlie other channelopathies, we investigated how mutations causal for BVMD, AVMD, ARB, ADVIRC, and RP impact the localization and oligomerization of Best1. We generated replication-defective adenoviral vectors encoding for WT and 31 mutant forms of Best1 associated with these five diseases and expressed them in confluent, polarized Madin-Darby canine kidney and/or RPE cells. Localization was assessed via immunofluorescence and confocal microscopy. Oligomerization was examined using live-cell fluorescence resonance energy transfer (FRET) as well as reciprocal co-immunoprecipitation experiments. We report that all 31 BVMD, AVMD, ARB, ADVIRC, and RP mutants tested can reciprocally co-immunoprecipitate with and exhibit comparable FRET efficiencies to WT Best1, indicative of unimpaired oligomerization. While all RP and ADVIRC mutants were properly localized to the basolateral plasma membrane, many but not all AVMD, ARB, and BVMD mutants were mislocalized to intracellular compartments. When co-expressed with WT Best1, mislocalized mutants predominantly co-localized with WT Best1 in intracellular compartments. Studies involving four ARB truncation mutants reveal that the first 174 amino acids are sufficient to mediate oligomerization with WT Best1 and that amino acids 472-585 are not necessary for proper trafficking. We conclude that, although mislocalization is a common result of BEST1 mutation, it is not an absolute feature of any individual bestrophinopathy. Moreover, we show that some recessive mutants mislocalize WT Best1 when co-expressed, indicating that mislocalization cannot, on its own, generate a disease phenotype, and that the absence of Best1 at the plasma membrane is well tolerated.