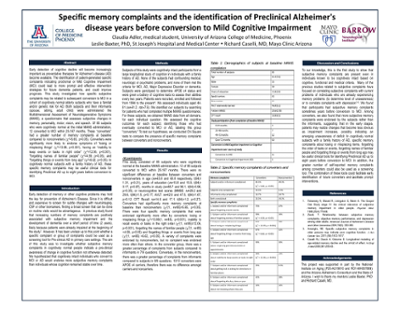 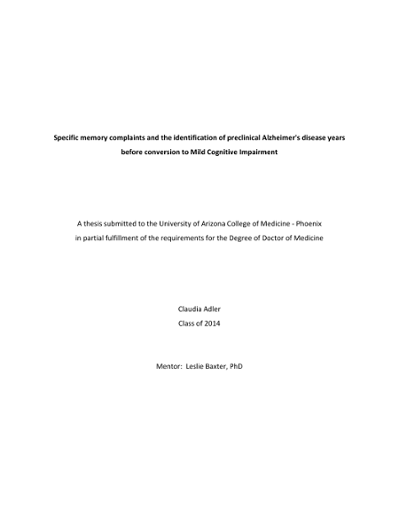 This item is part of the College of Medicine - Phoenix Scholarly Projects 2014 collection. For more information, contact the Phoenix Biomedical Campus Library at pbc-library@email.arizona.edu.

Early detection of cognitive decline will become increasingly important as preventative therapies for Alzheimer’s disease (AD) become available. While new imaging techniques and biomarkers have shown evidence of neuropathology in the preclinical stages of AD, most clinicians must rely on the subjective report of symptoms to identify the onset of cognitive decline. Patients often present to primary care physicians with complaints from self or family members about confusion, memory loss or personality changes. However, discriminating complaints associated with normal from abnormal aging is difficult. The identification of patient-generated specific complaints indicating prodromal or Mild Cognitive Impairment (MCI) could lead to more prompt and effective intervention strategies for future dementia patients, and could improve prognosis. This study investigated how specific subjective complaints may be related to subsequent conversion to MCI in a cohort of cognitively normal elderly subjects who have a familial and/or genetic risk for AD. Subjects included cognitively intact participants and their informants (spouse, sibling, adult child) from a large longitudinal study of cognition in individuals with a family history of AD. Participants were further characterized by their APOE ε4 allele status. Both subjects and their informants were administered the Multidimensional Assessment of Neurodegenerative Symptoms (MANS), a questionnaire that assesses subjective changes in memory, personality, motor, vision, and speech. Of 85 subjects who were cognitively normal at the initial MANS administration, 12 converted to MCI within 25-167 months. The participants who later converted to MCI had greater memory complaints at baseline compared to nonconverters (2 = 5.65, p <0.05). There were no significant differences in other MANS domains. In regards to specific memory complaints, converters were significantly more likely to endorse symptoms of “losing or misplacing things” (2 = 13.99, p<0.001), having an “inability to keep events or tasks in right order,” (2 =12.06, p<0.001), "forgetting names of familiar people" (2 = 4.59, p < 0.05), and "forgetting things or events from long ago," (2 = 6.62, p < 0.05). Nonconverters also endorsed some memory complaints, but no complaint or group of complaints was endorsed more than others. The APOE ε4 allele was observed in 83% of the participants who converted to MCI compared to 52% of those who remained cognitively intact over the course of the assessment period. In cognitively normal subjects with a family history of AD, specific memory complaints about losing or misplacing items, forgetting the order of tasks or events, forgetting names of familiar people and forgetting things or events from long ago may be useful clinical tools for identifying Preclinical AD up to eight years before conversion to MCI.