'Spells That Have Lost Their Virtue': The Mythology and Psychology of Shame in the Early Novels of George Eliot 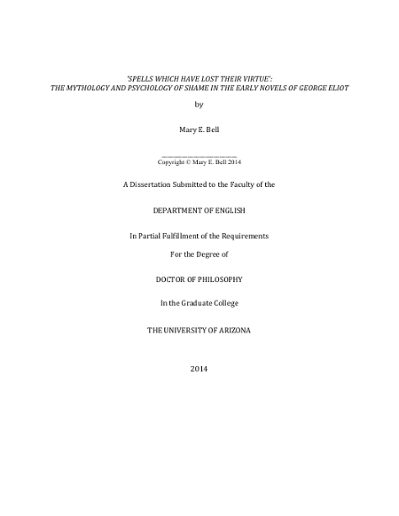 George Eliot's early novels Scenes of Clerical Life, Adam Bede, The Mill on the Floss, and Silas Marner, resist or rewrite English cultural myths that embody shame as a method of social control, especially myths from the Bible related to the doctrine of election. Eliot employs a two-level structure suggested by her reading of Feuerbach, Spinoza, and R.W. Mackay, in which the novels follow biblical plotlines, while she presents a positivist understanding of moral motivation derived from Spinoza, in which repressed shame must be acknowledged in order to attain moral freedom. In Chapter One, I argue that her favorite book as a child--The Linnet's Life--forecasts the psychic work of Eliot's protagonists. I also read Rousseau's Confessions--a book that she claimed had great influence on her--and demonstrate how Rousseau's understanding of shame as a corrupting influence shaped her treatment of shame in her novels. In Chapter Two, I discuss Scenes of Clerical Life in the context of English mythologies of the French Revolution. Deploying the gothic mode, Eliot rewrites characters from Carlyle's History of the French Revolution, and Dickens's Little Dorrit, to interrogate the tendency of the English to view all people like themselves as the elect, and to vilify and shame those who differ. In Chapters Three and Four, I argue that Eliot structures the plots of Adam Bede and The Mill on the Floss from the Genesis story of Cain and Abel, which is the type of election. Eliot uses this mythological structure to interrogate the power of shame to produce the very evil behavior it condemns, in Hetty, Maggie, and Mr. Tulliver. I discuss Romantic and Victorian versions of the Cain and Abel story, such as Byron's closet drama Cain compared to Eliot's own extension of the story in her poem The Legend of Jubal. I also discuss the treatment of the story of Cain and Abel in various theological treatises, by Bede, Augustine and Calvin. In Chapter Five, I argue Silas Marner's history parallels the history of the Hebrews from the flood, to the Babylonian exile and return. Eliot's treatment suggests that whether Silas is wicked or elect, the narrative is about the vindication of God, not Silas. In contrast, Silas himself is vindicated in the plot with Godfrey because of his choice to care for Eppie. Eppie represents the positive development of Christianity from the ancient Hebrew religion, as it was influenced and purified by Babylonian monotheistic religion. For Eliot (following Feuerbach and Mackay), the "Essence of Christianity" was not the shaming doctrine of election, but rather the doctrine of Christ, who offered forgiveness rather than blame and shame.