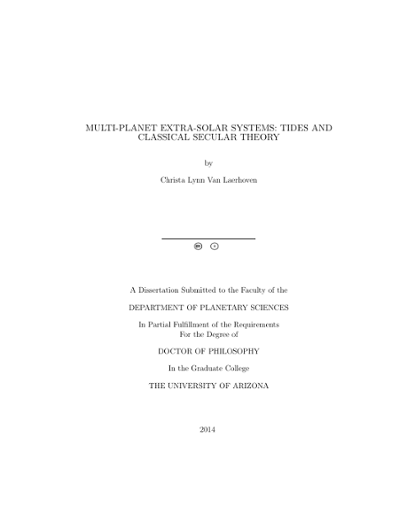 In a multi-planet system, gravitational interactions cause orbital eccentricity variations. For non-resonant systems, classical secular theory reveals that the eccentricities are vector sums of contributions from several eigenmodes. Examination of the eigenvectors often reveals subsets of planets that interact especially strongly as dynamical groups. Perturbations from other sources, such as tides, are shared among the planets through the secular interactions. If one planet's eccentricity is tidally damped, all the eigenmodes damp so as to leave a signature on their amplitudes. Therefore, if one desires to include some a priori tidal damping in an orbital fit, solutions should not assume the current eccentricity of that planet to be low, but rather for the eigenmodes that damp quickly to have low amplitude. The tidally perturbed planet may retain a substantial eccentricity, because some eigenmodes will be longer-lived. The secular eigenmodes, including relative damping rates, have been calculated for all 72 non-resonant extra-solar systems with adequate data. Tides also affect evolution of planets' semi-major axes, which is coupled with eccentricity evolution. A planet that, alone, would be quickly circularized so as to not experience much semi-major axis migration, could rapidly be forced into the star in the presence of an outer planet. Also, though such an inner planet may now be gone, the eccentricity of the outer planet could have been damped due to tides that acted on the inner planet. Any inferences about the primordial orbits of observed planets must consider these effects. For systems where the inner planet has not yet reached the star, the planets' eccentricities can be constrained for any particular assumed tidal dissipation factor Q', e.g. for the KOI-543 system, if the inner planet is rocky, the eccentricities must be<0.001. The habitable zone around low-mass stars is close to the star, precisely where tides are important. Low-mass stars are very long lived, and can be very old currently. A habitable planet likely needs tectonics for cycles that regulate the atmosphere, but a planet's internal heat will decay over long timescales. However, an outer planet could maintain the inner planet's eccentricity, allowing tidal heating to maintain long-term habitability. Secular interactions, coupled with tidal effects, may be critical for planetary habitability.