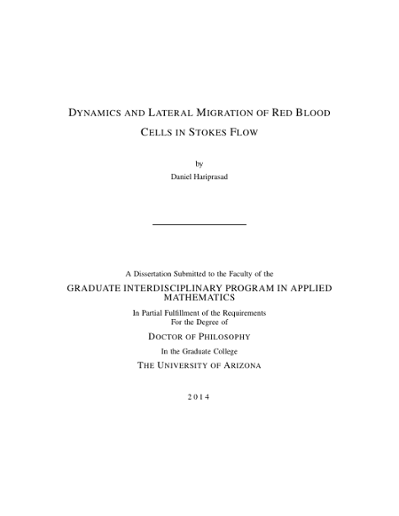 In blood microvessels, the finite size of the red blood cell relative to the vessel diameter gives rise to non-continuum behavior. One such effect is the presence of a cell-free or cell-depleted layer of plasma near the vessel walls. This results from the tendency of red blood cells to migrate away from solid boundaries, towards the center of the blood vessel. In order to understand this and other flow behaviors of blood, it is fundamental to consider the motion and deformation of single red blood cells suspended in flows, including the effects of solid boundaries. In this dissertation, a two-dimensional model is used to simulate the motion and deformation of red blood cells in Stokes flow. First, the dynamics of a red blood cell in an unbounded shear flow is considered. Under such conditions, cells may execute a tanktreading motion, in which the cell maintains a stable orientation and the membrane continuously circulates around the cell, or a tumbling motion, in which the cell continuously flips. The motion depends on the viscosity of the suspending medium, with tank-treading in a high-viscosity medium and tumbling in a low-viscosity medium. Here, the effect of including an elastic energy potential dependent on the phase of the tank-treading motion is considered. It is found that the cell may then execute a swinging motion, in which the orientation oscillates. Furthermore, an intermittent regime is found in which the motion alternates between swinging and tumbling. These results are consistent with previous findings based on a model with a fixed cell shape. Next, the behavior of a freely suspended single red blood cell in a flow with solid boundaries is examined. Two cases are considered, channel flow and semi-infinite shear flow. A low-viscosity suspending medium is assumed, such that a cell in an unbounded shear flow would show continuous tumbling motion. In channel flow, the presence of solid boundaries and the curvature of the velocity profile tend to inhibit tumbling motion. Tumbling of an isolated cell is not seen in channels of width 8 and 10 μm, but can occur in larger channels. In semi-infinite shear flow, the cell typically executes a complicated non-periodic motion that involves both tumbling and lateral migration, and is sensitive to the assumed initial conditions. In normal blood, which contains 40 to 45% red blood cells, a central core region containing red blood cells is formed, and a cell at the outer edge of this core experiences frequent interactions with other cells in the core, which tend to drive it down the concentration gradient, towards the wall. This effect is known as shear-induced dispersion. Here, the effect of such interactions is modeled as a lateral force directed toward the wall, acting on a single red blood cell in a semi-infinite shear flow. For a large enough lateral force, a stable tank-treading motion is predicted. The expected lateral force is estimated based on the theory of shear-induced dispersion, and it is found that it may be large enough to stabilize the orientation of tank-treading red blood cells at the interface of the cell-depleted layer and the red blood cell core. In such cases, the interaction of the cell with the wall generates a lift force directed away from the wall. The mechanism of this lift generation is analyzed using lubrication theory and considering the typical profile of the gap between a tank-treading cell and the vessel wall. The studies described above assumed that the vessel wall is a solid impermeable boundary. Vessel walls in vivo are coated with a permeable macromolecular glycocalyx or endothelial surface layer that impedes fluid motion. Here, the motions of a red blood cell adjacent to such a layer lining the solid boundary are considered in confined channel flow and semi-infinite shear flow. The results indicate that the effect of the layer is similar to the effect of decreasing the width of the channel and increases the rate of migration away from the wall. In summary, the motion of a single red blood cell in shear or channel flow shows complex dynamical behaviors. Generally, interactions with the wall stabilize cell orientation and generate lift forces that lead to the formation and persistence of the cell-free layer in narrow blood vessels.