Economic Evaluation Of Injury And Injury Prevention Interventions In The U.S. Fire Service 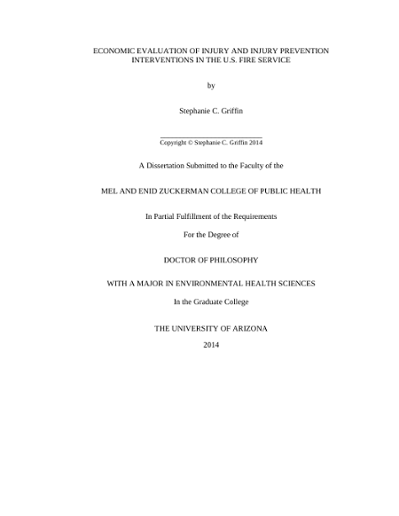 Previous research has shown that firefighters and emergency services personnel are at increased risk of fatal and non-fatal occupational injury compared to other U.S. workers. Analyses of injury and workers’ compensation claims data in this population has demonstrated that injuries are both common and an economic burden on the fire service, especially those caused by overexertion and that lead to sprains/strains. The increased risk of injury is associated with specific job tasks, including physical exercise, patient transport and fireground work, and with personal characteristics such as physical fitness. The economic evaluation of injury and injury prevention can help inform decision making on the part of leadership, including the identification and evaluation of potential targets for injury prevention programs. The aims of the current study were to: 1) evaluate a fitness intervention for new firefighters in terms of health, fitness, injury outcomes as well as workers’ compensation claims costs; 2) to analyze workers’ compensation claims data for trends in cause and injury type, as well as the effect of worker age; and 3) to model the expected change in back injury frequency and costs among emergency medical services personnel following the implementation of electrically powered stretchers. Primary data for the current study, including injury surveillance and workers’ compensation claims data, were provided by the Tucson Fire Department (TFD), Tucson, Arizona. The Probationary Firefighter Fitness Program (PFF-Fit) was designed by University of Arizona researchers in partnership with TFD. The program was implemented in the 2012 recruit academy. Outcomes, including measures of health and fitness, injury, workers’ compensation claim frequency and claims costs, were measured over 17 consecutive months for the intervention class, and compared to outcomes from controls comprised of the three most recent TFD recruit classes for the same time period. Comparing the intervention class to controls, health and fitness outcomes were statistically equivalent. The intervention group experienced statistically significantly fewer injuries, filed significantly fewer claims, and accrued aggregated claims costs approximately $33,000 less than the controls with an estimated equivalent reduction in indirect costs for a total of $66,000. The program implementation costs were nearly $69,000, leading to a one-year return on investment of -0.52 if based only on direct costs (workers’ compensation claims) or -0.048 if an estimate of indirect costs is included. Injury in the U.S. fire service has been the subject of many previous studies but the pattern of workers’ compensation claims has been studied much less frequently. Specifically, the effect of increasing worker age on the frequency and cost of claims has not been studied in this population. Routine injury surveillance and workers’ compensation data from TFD were merged and costs were described by mechanism of injury, injury type, body region and by age of the worker. The analysis of claims data shows that acute overexertion injuries are significantly more costly than injuries caused by other mechanisms, and that sprain/strain injuries are significantly costlier than other injury types. Results also show that age is an important predictor of claims cost in this population, with claims costs for firefighters over age 50, 120 to 144% greater than claims for workers under age 30. Back injury is common and costly among emergency services employees, including firefighters and emergency medical services providers, who transport patients. Previous research has demonstrated that electrically powered stretchers (EPS), which lift and lower the patient and stretcher between the loading and transport positions, are an effective means of reducing back injury among emergency medical services (EMS) providers, but to date no economic evaluation of this device has been conducted. A Markov decision analysis model simulation of a cohort of emergency services employees for incident back injury, disability and associated costs was used to compare outcomes with and without the use of the EPS. Implementation of the EPS resulted in an average cost savings of $4,617-$5,422 per emergency services employee over the service life of the equipment. Results of the current study show the PFF-Fit program may be a worthwhile program to reduce injury and claims costs but further research is needed to better understand the program’s potential effectiveness. We observed reductions in injury frequency and compensation costs among PFF-Fit program participants compared to controls; however, the mechanisms by which the PFF-Fit program were believed to be effective did not appear to be responsible for this difference. Workers’ compensation claims data analysis results continue to highlight the importance of targeting injuries caused by acute overexertion and injuries that result in sprain/strain. The results also indicate that targeting injury prevention efforts toward the specific needs of older workers may lead to important cost savings for the fire service. The EPS is likely an effective intervention to reduce back injuries and claims costs among fire and emergency services personnel, but further research is needed to evaluate injury and claims costs following implementation at several departments.