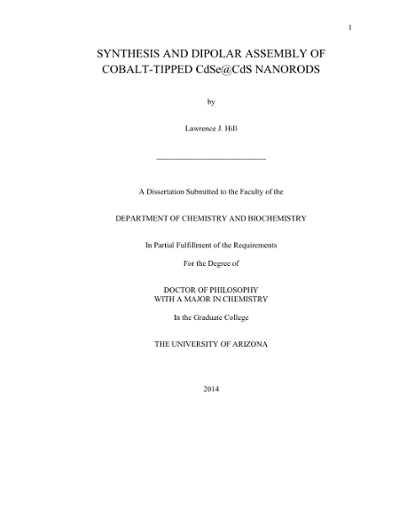 This dissertation contains four chapters with advances relevant to the fields of nanoparticle synthesis and nanoparticle self-assembly: a review of nanoparticle self-assembly, or “colloidal polymers”; dumbbell heterostructured nanorod synthesis; dipolar matchstick heterostructured nanorod synthesis; and self-assembly of dipolar matchsticks to form colloidal polymers. These chapters are followed by appendices containing supporting data for chapters two through four. The first chapter is a review summarizing current research involving the 1-D assembly of nanocrystals to form “colloidal polymers.” One of the major goals of materials chemistry is to synthesize hierarchical materials with precise controlled particle ordering covering all length scales of interest (termed, the “bottom up” approach). Recent advances in the synthesis of inorganic colloids have enabled the construction of complex morphologies for particles in the range of 1 – 100 nm. The next level of structural order is to control the structure of assemblies formed from these materials. Linear nanoparticle assemblies are particularly challenging to achieve due to the need to impart functionality to colloids such that (typically) only two sites are active per particle. An emerging idea in the literature which addresses this challenge is to consider linear assemblies of inorganic nanoparticles as colloidal analogs to traditional polymers. This conceptual framework has enabled the formation of linear assemblies having controlled composition (to form segmented and statistical copolymers), architecture (linear, branched, cyclic), and degree of polymerization (chain length). However, this emerging field of synthesizing colloidal polymers has not yet been reviewed in terms of methods to control fundamental polymer parameters. Therefore, linear nanoparticle assembly is reviewed in chapter 1 by applying concepts from traditional polymer science to nanoparticle assembly. The emphasis of chapter 1 is on controlling degree of polymerization, architecture, and composition for colloidal polymers, and seminal examples are highlighted which control these parameters. The second chapter is centered on a novel methodology to install ferromagnetic cobalt domains onto core@shell, “CdSe@CdS” nanorods. While the structures synthesized in this work were novel, the key advance from this work was the development of a methodology to separate nanorod activation from deposition of ferromagnetic cobalt domains onto semiconductor nanorods. As synthesized CdSe@CdS nanorods are passivated with strongly binding phosphonic acid ligands, and these ligands prevent direct deposition of many materials (such as cobalt). Synthetic methods must therefore modify nanorod surfaces prior to deposition of additional nanoparticle domains (tips). Previous synthetic methods for the deposition of magnetic domains onto nanorod termini typically combined activation of nanorod termini and metal deposition into a single synthetic step. While these previous reports were successful in achieving tipped nanorods, the coupling of these two reactions required matching the kinetics of nanorod activation and decomposition/reduction of metal precursors in order to achieve the desired heterostructure morphology. However, the presence of ligands used for nanorod activation can also affect the rate of metal precursor decomposition/reduction and the propensity of the metal to form free nanoparticles through homogeneous nucleation. Thus, simultaneous nanorod activation and metal deposition hinders modification of these syntheses to obtain differing heterostructured morphologies. In the work presented in chapter 2, we chemically activate nanorod termini towards cobalt deposition in a separate chemical step from deposition of metallic cobalt nanoparticle domains. First, reductive platinum deposition conditions were utilized to activate nanorod termini towards the deposition of cobalt domains, which were deposited in a subsequent reaction step. Then, the kinetics of nanorod activation during platinum deposition were tracked, and the platinum-tipped nanorod morphologies were correlated with the results of subsequent cobalt deposition reactions. Ultimately, controlled placement of cobalt domains onto one or both nanorod termini was demonstrated based on the degree of activation during platinum deposition. Cobalt nanoparticle tips were then selectively oxidized to form CoₓOy-tipped nanorods, which were a novel class of p-n type nanomaterials achieved over a total of five synthetic steps. Relevant supporting details for the synthesis of these dumbbell tipped nanorods are provided in Appendix A. The third chapter describes the synthesis of CoNP-tipped nanorods with a single, strongly dipolar, ferromagnetic CoNP-tip per nanorod. The key synthetic advance was the ability to activate a single terminus per nanorod without activation of lateral nanorod facets, which was vital in achieving these larger, dipolar, cobalt tips (rather than lateral decoration of cobalt onto nanorod lateral facets). These dipolar “matchstick” CoNP-tipped nanorods then spontaneously formed linear assemblies carrying nanorod side chains as pendant functionality. Activation of CdSe@CdS nanorods was found to occur through the deposition of small (< 2 nm) PtNP-tips which were not readily observable by standard characterization techniques. The finding that small (< 2 nm) PtNP-tips altered nanorod reactivity towards cobalt deposition emphasized the effect of subtle changes to nanorod surface chemistry. Relevant supporting details for the synthesis of these dipolar matchstick tipped nanorods are provided in appendix B. The fourth chapter is centered on the self-assembly of dipolar matchstick cobalt-tipped nanorods to form colloidal (co)polymers reminiscent of traditional bottlebrush polymers, with controlled composition and phase behavior on carbon surfaces. Similar to earlier findings in traditional polymer science, nanorod side chain length was found to significantly impact surface assembly of these colloidal analogs of bottlebrush copolymers, which provided a useful parameter for affecting surface wetting and phase behavior of nanoparticle thin films. This work was also the first demonstration of colloidal copolymers from the dipolar assembly of magnetic nanoparticles, where both segmented and statistical copolymer compositions were achieved. We then demonstrated, for the first time, that a colloidal copolymer with segmented composition can form a mesoscopic phase separated morphology which is similar to that observed for traditional block copolymers. This key advance opens the possibility of controlling structural ordering over still longer length scales by the development of methods to control phase separated morphologies in a manner similar to traditional block copolymers. Relevant supporting details for the synthesis and assembly of these colloidal bottlebrush polymers are provided in appendix C.