Healthy, Beautiful Hair: Cultivating the Self in a Women's Prison 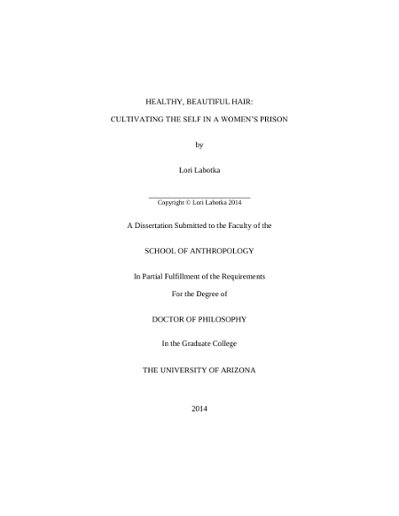 Incarceration has long been understood to challenge personal identities. Upon entry into the prison, individuals undergo rituals of humiliation that reformulate them in the image of the institution (Goffman 1961). Daily life in prison is then shaped by rules, regulations, and surveillance constraining the possibilities for self-presentation. This dissertation focuses on the ways women incarcerated in the state of Arizona construct a sense of self in the extraordinary context of prison. My analysis is based on a year and a half of fieldwork in an Arizona county jail and in a minimum-security yard at Arizona's state prison for women. I explore the linguistic and semiotic mechanisms by which women negotiate imposed inmate symbolism in relation to gender, race, class, and other aspects of identity critical to their self-understanding. Hair care rituals are one site of this negotiation I analyze in detail. During intimate hair styling sessions, women draw on larger cultural discourses of beauty and cultivate their bodies in reference to particular aesthetic values. These rituals infuse long hair with value as a symbol of beauty, worth, and productive prison time. Growing your hair, then, becomes an avenue to make claims to something other than an inmate identity and to fill the empty time of prison punishment. In light of the rapid expansion of the U.S. prison system over the past three decades, my analysis contributes to scholarship on modern incarceration. Attention to the practices women engage in highlights the constant humiliation of prison punishment. The mundane regulations of prison, such as uniforms, hair care restrictions, and limitations on hygiene, manipulate normalcy to such a degree as to cause a continual affront to the self. Beyond reformulating individual identity, I argue that the humiliation of prison punishment challenges the humanity of incarcerated individuals. The linguistic and semiotic practices women employ, like hair care rituals, make claims to dignity in the face of that challenge. However, these practices also carry the potential to become sites of punishment as officers animate their authority in prison discipline. These moments of discipline normalize the state's domination over incarcerated women, opening the space for severe forms of punishment. The same threads of humiliation and degradation that have been explored in the extreme conditions of solitary confinement carry across spaces of incarceration, framing the mundane methods of minimum-security punishment. When growing one's hair becomes a critical claim to dignity, and that claim is contested through restriction, regulation, and control over hair, the constant threat incarceration makes to one's humanity becomes visible. The implications of this threat, I argue, can be realized in bodily violence, total domination, and even madness.