Identity and Authority: Changes in the Process of Debates over the Islamic Marriage Contract among Contemporary Muslim Arab Intellectuals 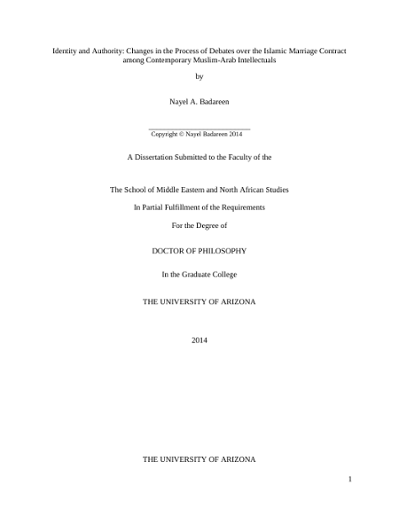 Throughout Islamic history, Islamic schools of law (madhāhib) enjoyed tremendous authority. In addition, traditional religious institutions that have taught the doctrines of the various Islamic schools of law have also wielded similar authority within the Arab-Muslim states. However, Arab-Muslim intellectuals challenged the authority of these madhāhib both from within the madhāhib and from outside of them. As a result, consensus (ijmā`) reached by past jurists of the madhāhib, has also been challenged in favor of a new type of ijtihād known as collective ijtihād. This new method of ijtihād allows professional women to participate in the process of lawmaking alongside men as reforms are made to Islamic family law. As a consequence of this legal process, the authoritarian method of traditional consensus (ijmā`) has been weakened in favor of more inclusive methods which allow for the creation of laws that are more favorable to women. Over the course of the twentieth century there has been a dynamic and ongoing debate within both traditionalist and reformist circles of Arab-Muslim society regarding the topic of marriage. Muslim conversations regarding the marriage contract demonstrate that the debates over family law in general, and the marriage contract in particular, are complex and challenging. The fact that not all Arab-Muslim intellectuals and muftīs share the same opinion regarding the legal age of marriage for women, the role of the marriage guardian (walī) in marriage, or the right of women to conduct their own marriages, for example, illustrates this point. Even individuals from within the same Islamist party have vastly differing opinions. While some argue for the preservation of the Islamic tradition by the continued restriction of a wife's role in her marriage, others want to grant women broader agency in some aspects of the marriage contract. All intellectuals, traditionalists, Salafis, and reformists, however, draw on past Islamic authority--the Qur'anic text, the Sunna of the Prophet, and past jurists' opinions--in order to legitimize their argument in an effort to preserve the identity of Muslim society and its core foundation, the Muslim family. Chapter one of this dissertation introduces the origins of Muslim jurists' opinions and rulings in Islamic jurisprudence (fiqh). While the chapter outlines the opinions of the majority of jurists regarding the age of puberty (bulūgh) for men and women, the age of financial competency (rushd), and the legal age of marriage, it also illustrates the opinions of minority jurists who reject the marriage of minors outright. Chapter two demonstrates the opinions of numerous Arab-Muslim intellectuals, as well as the codification of some of the Arab-Muslim states' Personal Status Laws (PSLs), and the debates among intellectuals along with the evidence they cite to justify their opinions. Chapters three and four are concerned specifically with debates among Moroccan intellectuals. They also include a discussion of the history of debate over the Moroccan Mudawwana from its initial publication in 1957 through the present day. The chapters discuss the opinions of Moroccan intellectuals regarding some of the Articles of the Mudawwana and show the evidence presented by each side both for and against reforming the Mudawwana. Chapters three and four also present the opinions of intellectuals voiced during personal interviews I conducted in 2013. These interviews show how complex the task of compartmentalizing the various Arab-Muslim intellectuals' opinions may be when seeking to label them either traditionalist or reformist with respect to their views on the rights of women in marriage.