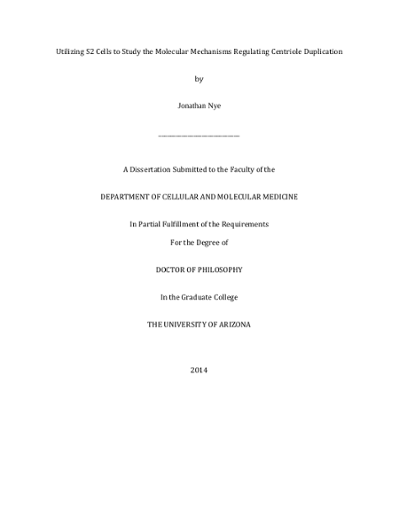 Centrosomes are complex organelles consisting of a pair of small microtubule based structures called centrioles embedded in an amorphous cloud of pericentriolar material (PCM). These organelles are critical for proper mitotic spindle assembly and orientation, and can also migrate to the plasma membrane where, as basal bodies, they serve to nucleate cilia¹. Centrioles are the core duplicating elements of the centrosome and, similar to DNA, duplicate once per cell cycle during S-phase². Errors in this process can lead to a cell that contains too many or too few centrosomes and are thought to promote tumorigenesis by directly promoting genomic instability and loss of polarity in stem cells³⁻⁷. Polo-like kinase 4 (Plk4) and Asterless (Asl) are both essential for centriole duplication to occur and overexpression of either of these proteins leads to cells that contain too many centrosomes, a condition known as centrosome amplification. Interestingly, both of these proteins also have the unique ability to promote de novo formation of centrioles in cells that normally lack centrioles⁸⁻¹⁴. Plk4 is a member of the Polo-like kinase family of proteins and is named after the founding member Drosophila Polo¹⁵. In humans, there are four members (Plk1-4) that all share sequence similarity and an N-terminal ser/thr kinase domain. Plk's 1-3 all contain two characteristic Polo box (PB) motifs, downstream of the kinase domain, that consist of a six stranded β-sheet lying across a C-terminal α-helix¹⁶. However, Plk4 was thought to be unique among family members since it only contained one C-terminal PB domain and a larger cryptic polo box domain that showed very little sequence similarity to known PBs. However, we performed an in-depth structure/function analysis of this cryptic polo box region and were able to determine, through x-ray crystallography, that Plk4 is unique among Plk family members not because it contains one PB domain but, in fact, because it contains three polo box domains. Thus, the cryptic polo box domain contains two previously unidentified polo boxes, termed PB1-PB2, upstream of the C-terminal PB3¹⁷. Furthermore, we found that PB1-PB2 is necessary for proper localization of Plk4 and that the entire PB1-PB2 cassette is necessary for binding to Asl. Our results also indicate that the PB1-PB2 domain plays a critical role in regulating Plk4 autophosphorylation and degradation, in order to restrict centriole duplication to once and only once per cell cycle. Previously Asl has been shown to be not only a binding partner of Plk4 but also a substrate for Plk4 kinase activity, however, the functional significance of this phosphorylation has remained elusive⁹. Our work has shown that Asl phosphorylation by Plk4 is conserved from flies to humans and is restricted to the N-terminal (Asl-A) region. In total we identified 13 phosphorylated residues via mass spectrometry. Analysis of phosphorylation mutant constructs revealed that Plk4 and Asl are involved in a novel feedback loop controlling centriole duplication. This feedback loop consists of two important features: first, Asl oligomerization stimulates Plk4 kinase activity and thus promotes centriole duplication and second, the Asl-A region can be phosphorylated by Plk4, preventing further Asl oligomerization, which in turn limits the amount of active Plk4. We propose that this feedback loop is a crucial step in limiting a mother centriole to only one daughter per cell cycle. This work represents a significant advance in our understanding of the processes that govern the centriole duplication pathway and specifically the structure and function of two critical components, Plk4 and Asl. A detailed understanding of the molecular mechanisms controlling centriole biogenesis is an essential first step in our goal of understanding their role in tumorigenesis and may serve as a guide for future studies focused on targeting this pathway for the prevention or treatment of cancer.