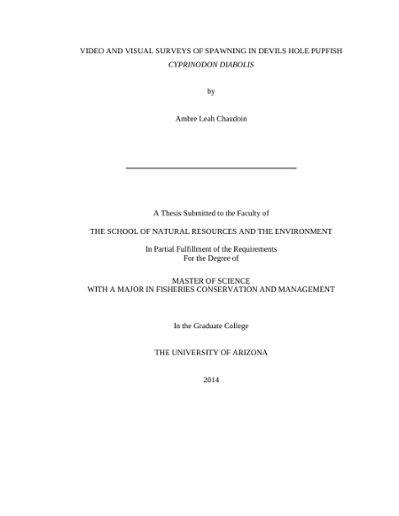 The highly endangered Devils Hole pupfish Cyprinodon diabolis exists in a single warm spring, Devils Hole, in Death Valley National Park, California-Nevada. Over the past decade, record-low population size and renewed interest in captive propagation of the species have emphasized information deficits in some aspects of Devils Hole pupfish reproductive ecology. In particular, there is a dearth of information on factors that influence spawning behavior. Furthermore, efficient monitoring of fish behavior in isolated sites such as Devils Hole can be a logistical and costly challenge. Thus, I compared three methods to monitor spawning in Devils Hole pupfish, and investigated environmental factors associated with spawning February–December 2010. A solar-powered video surveillance system that incorporated fixed-position above-water and underwater cameras provided continuous video monitoring of a shallow rock shelf in Devils Hole that the Devils Hole pupfish utilizes for spawning. I used visual surveys to record additional information on temporal and spatial patterns in spawning on the shelf. Dissolved oxygen, temperature, and light intensity datalogging meters recorded environmental data continually from a fixed point on the shelf, and I conducted once or twice monthly algal/cyanobacterial surveys to measure percent cover of key species across the shelf. Water level and precipitation data provided by the National Park Service revealed earthquake-induced seiche and storm-induced flash-flood events. An underwater camera detected significantly more overall and peak-season spawning than an above-water camera. The visual surveys yielded data that contained much more variability and sampling error than data from video methods. Underwater video data revealed a bimodal spawning pattern during 2010, with a primary spawning period in spring and a secondary spawning period in fall. Furthermore, underwater fixed videography was the most cost-efficient of the three methods. Zero-inflated Poisson regression showed greatest spawning activity was associated with the following conditions: dissolved oxygen 2.6–4.8 mg/L, total daily light intensity 133,250–400,300 lux, mean percent cover filamentous algae/cyanobacteria 24–60% and especially 24–27%, and presence of earthquake disturbance; and among significant interaction effects, more spawning occurred at approximately 2.6 mg/L dissolved oxygen when diel dissolved oxygen variation was low (approximately 0.3–1.6 mg/L); at lower–mid-range monthly mean percent cover filamentous algae/cyanobacteria (approximately 24–32%) when total daily light intensity was lower to mid-range (110,000–330,000 lux); and post-earthquake when diel dissolved oxygen variation was low (0.6–1.3 mg/L). Increased spawning occurred after earthquakes on 27 February and 21 October 2010, but not after an earthquake on 4 April 2010 at the peak of the primary spawning period. There was significant spatial variation in spawning; most spawning occurred in the northeast area of the shelf. This study provides new information on the benefits of fixed videography to monitor fish behavior in a freshwater spring, and on factors in spawning of Devils Hole pupfish. Self-contained underwater cameras are affordable and widely available, and are a valuable tool for monitoring remote or sensitive aquatic ecosystems. Dissolved oxygen, diel dissolved oxygen variation, total daily light energy, percent cover filamentous algae/cyanobacteria, earthquake disturbance, and location on the shelf were the strongest predictors of spawning behavior in wild Devils Hole pupfish. These are factors that might be utilized in adaptive management and captive propagation of the species.

School of Natural Resources and the Environment