Development Of Biosensors For Detection Of Pathogens In Complex Sample Matrices 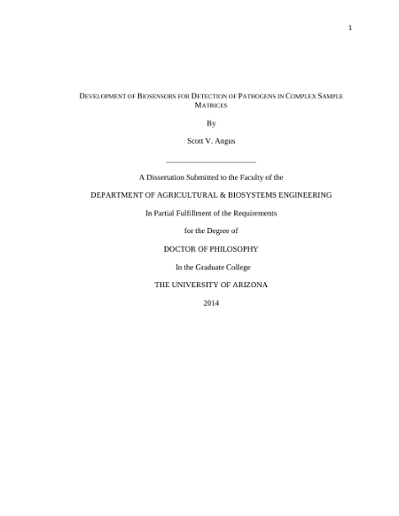 Protozoa and bacteria can easily cause disease in humans, specifically E. coli, Plasmodium falciparum, and Cryptosporidium parvum. These three pathogens are associated with large public health concerns that span the globe. The variety of locations in which these can be found is extremely high. Cryptosporidium spp. are extremely resilient when in oocyst form, P. falciparum is in the Anopheles spp. mosquito, while E. coli can be found on anything from food and water, to the skin and gut. The diverse range of locations these can be found in means that a portable sensor for their detection is necessary. In detecting Cryptosporidium, microscopy is the preferred method of identification currently. This requires a trained lab technician as well as calibrated and expensive optical equipment. Technician error can lead to false negative or positive diagnoses as well as sample destruction. A method to remove this technician interaction is thus necessary. This method must allow for objective results that are not open to interpretation. Particle immunoagglutination assays with Mie scatter allow for such an approach using inexpensive components. Particle immunoagglutination relies on the principles of antibody-antigen interaction and antibody conjugated latex particles. Using highly carboxylated latex particles, it is possible to attach IgG antibodies that are specific to a target antigen. Mie scatter is governed by particle size rather than wavelength as other forms of scatter. These two combined allow for an increase in light scatter based on particle size. This is correlated in a linear manner as long as the number of antibody-conjugated particles is higher than the number of antigens. Microfluidics is an ever growing field in the field of lab-on-a-chip that works very well with particle immunoagglutination. In this paper, a method to rapidly identify the presence of Cryptosporidium using microfluidics and particle immunoagglutination is discussed and analyzed. This method allows for a low detection limit of 1-10 oocysts/sample and an assay time of approximately 10 minutes. Results are displayed on a computer screen as the value of light scatter intensity and, when compared to a standard curve, is an objective way to identify the concentration and presence of oocysts in a diverse range of samples. These samples include PBS, pool water, and sump water. This system also works with P. falciparum, which causes malaria in rural and urban poor regions of the world. With the low income and remote nature of these locations, a portable microfluidic device is necessary. Smartphones allow for a portable microfluidic device that can detect P. falciparum antigens in 10% whole blood. This system is capable of detecting as little as 1 pg/mL antigen. The microfluidic chip is inexpensive and disposable, allowing for a portable and inexpensive system. Using a single smartphone, a lab technique requiring a spectrometer, light source, and laptop can be made portable and less expensive, while maintaining sensitivity and specificity. In order to identify biological agents, there are commonly 3 methods for doing so: PCR, culturing, and ELISA. Culturing can take more than 24 hours, but results in a high signal to initial target ratio, while ELISA has poor sensitivity due to a 1:1 signal to target ratio, though is much quicker than culturing at usually 3 hours or less. PCR manages to solve both these problems by exponentially increasing the number of copies of target genetic material in a relatively short time frame of 1-3 hours. PCR relies on 4 basic components: target genetic material, primers to set a start and end location for duplication, polymerase to add base pairs to the strand beginning at the primers, and heat. PCR has worked very well during the past 31 years. It has worked so well that it is often the gold standard. However, there are flaws built into today's systems. These largely come in the form of inefficient heat transfer via conduction and large sample volumes due to unnecessary additions of nuclease free water (NFW). Both of these can be easily overcome by droplet PCR. Droplet PCR relies on small sample volumes of between 8 and 12 μL and convection in oil rather than conduction through plastic. In this study, it was found that droplet PCR could be performed on genomic E. coli DNA in as little as 15 minutes for 30 cycles. Sensitivity was also analyzed and found to be 2.62 pg DNA/μL or about 5 x 10² cfu/sample. PCR has a theoretical lower limit of 1 copy of genetic material and this is only 2 orders of magnitude above that. The system was also tested for portability and resistance to shock and vibration. It was found that the surface heated, thermocouple guided system is more shock and vibration resistant than standard wire guided, hanging droplet PCR systems. It was also found that the use of coconut oil allows for the system to be transported without fear of the contents spilling out and contaminating other samples. This is because of coconut oil's high melting temperature.