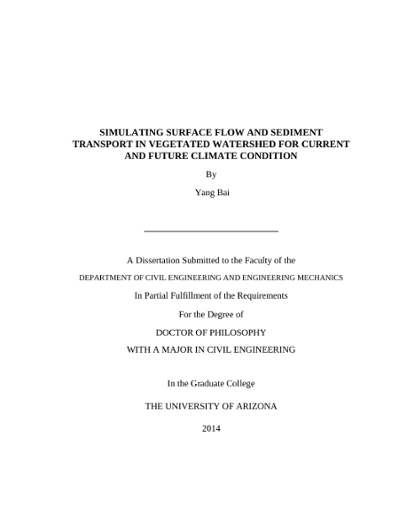 The complex interaction between flow, vegetation and sediment drives the never settled changes of riverine system. Vegetation intercepts rainfall, adds resistance to surface flow, and facilitates infiltration. The magnitude and timing of flood flow are closely related to the watershed vegetation coverage. In the meantime, flood flow can transport a large amount of sediment resulting in bank erosion, channel degradation, and channel pattern change. As climate changes, future flood frequency will change with more intense rainfalls. However, the quantitative simulation of flood flow in vegetated channel and the influence of climate change on flood frequency, especially for the arid and semi-arid Southwest, remain challenges to engineers and scientists. Therefore, this research consists of two main parts: simulate unsteady flow and sediment transport in vegetated channel network, and quantify the impacts of climate change on flood frequency. A one-dimensional model for simulating flood routing and sediment transport over mobile alluvium in a vegetated channel network was developed. The modified St. Venant equations together with the governing equations for suspended sediment and bed load transport were solved simultaneously to obtain flow properties and sediment transport rate. The Godunov-type finite volume method is employed to discretize the governing equations. Then, the Exner equation was solved for bed elevation change. Since sediment transport is non-equilibrium when bed is degrading or aggrading, a recovery coefficient for suspended sediment and an adaptation length for bed load transport were used to quantify the differences between equilibrium and non-equilibrium sediment transport rate. The influence of vegetation on floodplain and main channel was accounted for by adjusting resistance terms in the momentum equations for flow field. A procedure to separate the grain resistance from the total resistance was proposed and implemented to calculate sediment transport rate. The model was tested by a flume experiment case and an unprecedented flood event occurred in the Santa Cruz River, Tucson, Arizona, in July 2006. Simulated results of flow discharge and bed elevation changes showed satisfactory agreements with the measurements. The impacts of vegetation density on sediment transport and significance of non-equilibrium sediment transport model were accounted for by the model. The two-dimensional surface flow model, called CHRE2D, was improved by considering the vegetation influence and then applied to Santa Cruz River Watershed (SCRW) in the Southern Arizona. The parameters in the CHRE2D model were calibrated by using the rainfall event in July 15th, 1999. Hourly precipitation data from a Regional Climate Model (RCM) called Weather Research and Forecasting model (WRF), for three periods, 1990-2000, 2031-2040 and 2071-2079, were used to quantify the impact of climate change on the magnitude and frequency of flood for the Santa Cruz River Watershed (SCRW) in the Southern Arizona. Precipitation outputs from RCM-WRF model were bias-corrected using observed gridded precipitation data for three periods before directly used in the watershed model. The watershed model was calibrated using the rainfall event in July 15th, 1999. The calibrated watershed model was applied to SCRW to simulate surface flow routing for the selected three periods. Simulated annual and daily maximum discharges are analyzed to obtain future flood frequency curves. Results indicate that flood discharges for different return periods are increased: the discharges of 100-year and 200-year return period are increased by 3,000 and 5,000 cfs, respectively.