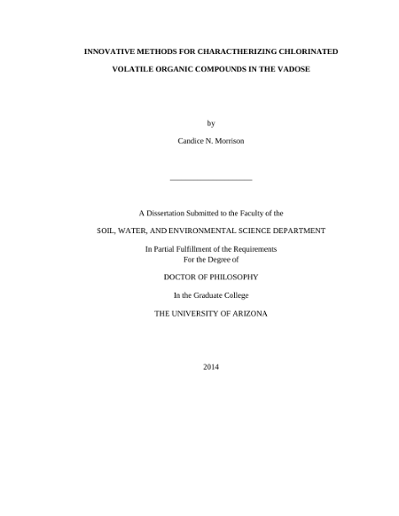 Chlorinated solvents, such as tetrachloroethene (PCE), trichloroethene (TCE), and carbon tetrachloride (CT), are primary contaminants of concern for a vast majority of federal and state Superfund sites in the US due to their prior widespread use as solvents for numerous industrial and commercial applications. Source-zones containing large quantities of contaminant are typically present at sites contaminated by chlorinated solvents. Particularly in regions such as the SW US, these source zones reside, at least in part, in the extensive vadose zones typical of these regions. There are two primary concerns associated with sites that contain vadose-zone contaminant sources. First, discharge of contaminant vapor from the vadose-zone source may impact the underlying groundwater. This could contribute to overall risk posed by the site, and delay attainment of groundwater cleanup goals. Second, contaminant vapor from the vadose-zone source may migrate to the land surface and transfer into buildings, thereby causing vapor intrusion. The focus of this research is the development and application of innovative methods for characterizing vadose-zone contamination. Phytoscreening is a new, rapid, and relatively low-cost characterization technology that can be used to screen an area for the presence of select contaminants such as chlorinated VOCs. Phytoscreening is based on the sampling and analysis of plant tissues (branch, trunk, leaf, seed, needle) to detect the presence of contamination in soil and groundwater. Phytoscreening is applied to three sites in Arizona to evaluate its use in semi-arid environments. In addition, all available field data sets have been compiled to examine potential correlations between contaminant concentrations measured for tree tissue and those for groundwater. Contaminant concentrations were detected in tree tissue samples collected from two of the three Arizona sites. A review of the field site data suggests that a correlation exists between PCE and TCE concentrations measured for tree tissue and those measured in groundwater. The correlation can be used to estimate vegetation concentrations when groundwater concentrations are known. The reasonable degree of correlation supports the use of phytoscreening as a robust screening tool to provide a first-order characterization of anticipated concentrations of contaminants in groundwater. This tool can also be used to screen an area for vapor intrusion potential. A sampling method for the determination of chlorinated contaminant vapor concentrations present in the vadose zone, specifically trichloroethene (TCE), has been developed, and was applied at the Tucson International Airport Authority (TIAA) Superfund site. The method was modified from the NIOSH Manual of Analytical Methods (NMAM) # 1022 for TCE, and is targeted to situations requiring cost effective sample collection, particularly for cases when concentrations are at or below maximum contaminant levels (MCLs). In the modified NIOSH method, TCE vapor is sampled using a solid sorbent cartridge containing coconut shell charcoal arranged into primary and secondary sections. Gas Chromatography with Mass Spectrometry is used to confirm and quantify the presence of TCE. The results of laboratory tests demonstrate a maximum TCE vapor load of approximately 22 mg before breakthrough to the secondary section, and a recovery of approximately 97%. The results of a performance comparison test conducted in the field demonstrated that results obtained with the cartridge samplers were similar to those obtained with the use of standard Summa canisters. Landfill waste often serves as a long-term source of volatile organic compounds (VOCs) in the vadose zone. In turn this contamination can have a significant impact on groundwater and on residential or commercial indoor air quality through vapor intrusion. Sulfur hexafluoride (SF₆) was used as the non-reactive gas tracer. Gas samples were collected from a multiport monitoring well located 15.2 m from the injection well, and analyzed for SF₆, CH₄, CO₂, and VOCs. The travel times determined for SF₆ from the tracer test are approximately two to ten times smaller than estimated travel times that incorporate only gas phase diffusion. In addition, significant concentrations of CH₄ and CO₂ were measured, indicating production of landfill gas. Based on these results, it is hypothesized that the enhanced rates of transport observed for SF₆ are caused by advective transport associated with landfill gas generation. A method termed vapor-phase tomography has recently been proposed to characterize the distribution of volatile organic contaminant mass in vadose-zone source areas, and to measure associated three-dimensional distributions of local contaminant mass discharge. The method is based on measuring the spatial variability of vapor flux, and thus inherent to its effectiveness is the premise that the magnitudes and temporal variability of vapor concentrations measured at different monitoring points within the interrogated area will be a function of the geospatial positions of the points relative to the source location. A series of flow-cell experiments was conducted to evaluate this premise. A well-defined source zone was created by injection and extraction of a non-reactive gas (SF₆). Spatial and temporal concentration distributions obtained from the tests were compared to simulations produced with a mathematical model describing advective and diffusive transport. Tests were conducted to characterize both areal and vertical components of the application. Decreases in concentration over time were observed for monitoring points located on the opposite side of the source zone from the local-extraction point, whereas increases were observed for monitoring points located between the local-extraction point and the source zone. The results illustrate that comparison of temporal concentration profiles obtained at various monitoring points gives a general indication of the source location with respect to the extraction and monitoring points.