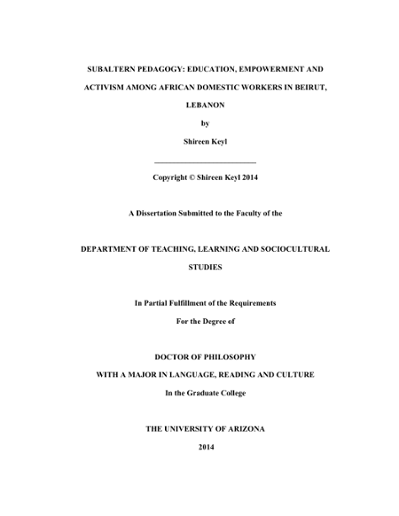 According to critical pedagogues and post-development scholars, globalization and transnational movement open up new avenues for pedagogy; to be sure, some scholars assert the development sector is in need of a paradigm shift to accommodate "new forms of pedagogy" (Appadurai, 2000) while subaltern scholars call for "alternative pedagogies" (Sherpa, 2014) for the theorizing and understanding of subaltern, marginalized groups within the educational realm. In the search for and transition to a subaltern pedagogy, it is necessary to tap into the very voices of those who comprise the subaltern, because, as Kelly and Lusis (2006) assert, "Researchers are frequently interested in understanding the experiences of 'the immigrant,' as an objective analytical category, rather than the experiences of 'an immigrant'" (p. 831). The aim of this study is to examine the interplay between knowledge production of migrant workers, power as domination and empowerment, and the appropriation of space in considering how these groups are able to segue subaltern epistemologies into forms of activism and empowerment; as such, this study looks at constructions and deconstructions of power among historically oppressed peoples in macro, meso and micro contexts. I assert that dominant discourses of power attempt to perpetuate an intentional subjugation of oppressed groups, in this case, migrant workers, especially female domestic workers. However, via the creation of a critical, oppositional consciousness by way of reciprocity and dialogism within the migrant worker and Lebanese activist community, migrant workers are able to harness agency and empowerment even within the most oppressive of societal conditions. What this research reveals is that migrant workers are able to create powerful counter-cultural communities of practice and epistemological spaces for learning. Based on this research, I assert a subaltern praxis, a paradigm shift comprising of a subaltern pedagogy and practice, that incorporates ideas of critical pedagogy, spatial analysis, and postcolonial/third world feminisms; this dialectic triad informs the subaltern interstitial and liminal experience, the need for the building of a critical consciousness for educators and learners alike, and a re-mapping and re-configuration of subaltern epistemologies for the benefit of all who desire to learn about migration and the refugee experience.