We're Not in Kufa Anymore: The Construction of Late Hanafism in the Early Modern Ottoman Empire, 16th - 19th Centuries CE 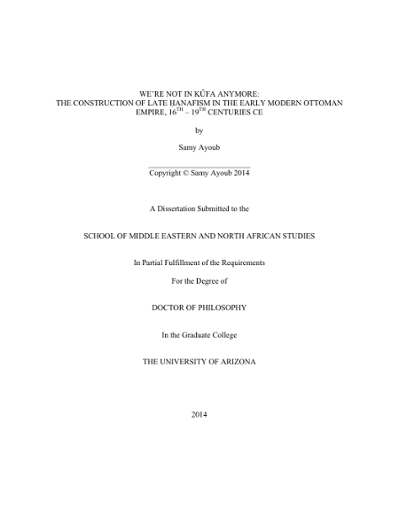 At the intersection of religion, law, and the state lies the opportunity to explore the impact of the state on the legal order. This study investigates such an impact through an examination of authoritative Hanafi legal works from the 16th - 19th centuries CE, casting new light on the understudied late Hanafi jurists (al-muta'akhkhirun) in the early modern period. This dissertation argues that jurists secure the authority of the late Hanafi school (madhhab) through engagement with legal texts from previous generations of Hanafis, disclosure of the reasoning that underlies late Hanafi legal opinions, and invocation of principles, authorities, and juridical formulas that construct late Hanafism in the early modern period in particular ways. I demonstrate how late Hanafi jurists develop their own identities, opinions, and consensus in relation to earlier Hanafi opinions. For late Hanafis, the past authorities, texts, and opinions were never irrelevant: the past constituted a point of reference and continuity for their scholarship. The division of Hanafis into late and early is not simply a matter of time, although it is true that the late Hanafis produce legal works chronologically later than the early Hanafis did. The distinction is more important for identifying that there is a tradition which characterizes the group of scholars identified as being chronologically "late" that develops in the Mamluk and Ottoman periods. By taking the madhhab and its juristic discourse as the central focus, this study demonstrates how late Hanafi jurists assign probative value and authority to Ottoman state orders and edicts. This is reflected in the state's ability to settle juristic disputes, to order specific opinions to be adopted in fatawa, and to establish its orders as authoritative and final reference points. The incorporation of state orders within authoritative Hanafi legal commentaries, treatises, and fatawa collections is made possible by a turn in Hanafi legal culture that embraced the indispensible nature of the state in the law-making process. Current scholarship in the field of Ottoman Studies that focuses on "structural" interventions by the state (appointing muftis and judges, developing an Ottoman learned hierarchy) does not fully capture the influence of the state on the substance of the legal discourse. This project explores late Hanafi responses to Ottoman state interventions in the process of law-making, and the ways in which late Hanafi jurists talk to and about political power. The dissertation concludes by offering two proposals. The first is that late Hanafi legal scholarship in the early modern period secures a limited space for the political authority in the process of law-making. This proposal finds that the argument for the epistemic divorce between the domain of Islamic law and the authority of the state in current Islamic Studies scholarship is untenable. The second proposal is that the late articulation of the Hanafi legal tradition is not only integral to understanding modern movements to codify Islamic jurisprudence, and the role of the state in these transformations, but also to tracing many legal norms that were incorporated in modern civil codes in majority Muslim countries. By introducing "late Hanafism" as a category of analysis, and situating the madhhab as the locus of the investigation, this dissertation fills in a gap in the fields of Islamic legal studies and Ottoman studies. This study draws the focus from Ottoman court archives to the Hanafi juristic discourse itself for understanding how Islamic law was developed and applied, offering a new perspective on the internal legal discourse of late Hanafis and their responses to state power.