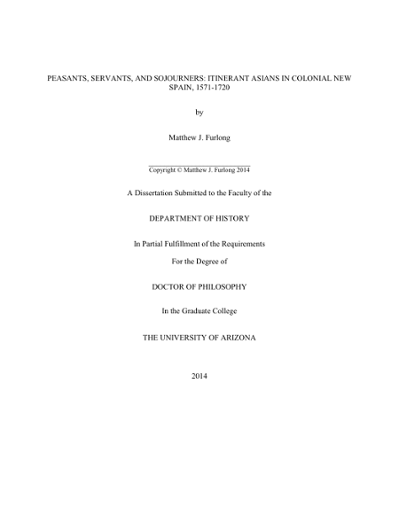 This dissertation charts the social interactions, work experiences, and routes traveled by Asian workers within and between the colonial Philippines and Mexico between 1571 and 1720. Residents of early colonial Mexico called these workers chinos. Most free chinos were Filipinos, but enslaved chinos had origins all over Asia. Chinos crossed the Pacific on the Manila galleons, which sailed between the Philippines and Mexico. These ships facilitated the exchange of American products, mostly silver, for Asian products, primarily textiles. This study explores the social and spatial mobility of chinos to show how trade between and within the Americas and Asia opened a new chapter in the social history of the early modern world. This project expands the study of Latin American history in three ways. First, it analyzes the ways in which chinos, especially Filipinos, created and sustained colonial Mexico as part of a Pacific world, advancing scholarship that already celebrates Mexico as part of an Atlantic world. Next, this work develops the study of economic history by comparing the ways that chinos shaped and connected different regions of colonial Mexico by employing Southeast Asian labor organization and technology. Thirdly, this dissertation refines studies of ethnicity by considering the ways that chinos, especially free laborers, represented themselves as members of a new corporate group in colonial Mexico, and appropriated the ethnic category of "indio," originally established for indigenous people in the Americas. They used these categories to claim resources from the colonial state, to form social networks, and to create bases for collective action. This work advances the field of early modern global and world history. It analyzes the Philippines and Pacific New Spain as arenas of cross-cultural interaction, labor, migration, and production in their own right, rather than as mere commercial intermediaries mediating between East Asia and the Americas. Finally, this work considers the ways that the long history of interactions between Island Southeast Asia and the rest of Asia shaped the mobility of chinos, while also situating their trans-Pacific interactions within the institutions of the global tributary empire of the Spanish Habsburgs.