Cross-Linguistic Influence in L3 Portuguese Acquisition: Language Learning Perceptions and the Knowledge and Transfer of Mood Distinctions by Three Groups of English-Spanish Bilinguals 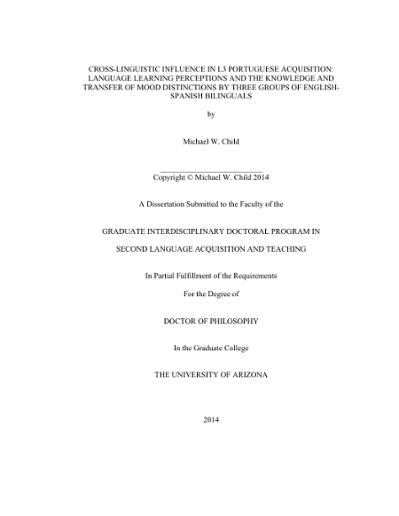 Interest in Portuguese has steadily increased over the last decade in universities across both North and South America (Carvalho 2002, 2011), principally among Spanish speakers. Generally speaking, Portuguese for Spanish-speakers courses have been designed around the theory that Spanish-speaking students will benefit from cross-linguistic influence (CLI, or transfer) due to the typological similarity that exists between Portuguese and Spanish (see Júdice, 2000). Related to this, the Typological Primacy Model, or TPM (Rothman, 2011), states that CLI in L3 acquisition principally comes from the language that is perceived to be typologically similar to the target language (psycho-typology, see Kellerman, 1983), resulting in both positive and negative transfer. Although there is a high degree of typological similarity between Spanish and Portuguese, it is unknown whether or not this linguistic proximity is equally salient to all learners and whether or not learners view this linguistic proximity as an advantage or a disadvantage when learning Portuguese. Furthermore, some studies have suggested that the context in which one's Spanish is acquired may play a role in the different types of CLI evident among different Spanish-speaking learners of Portuguese (e.g., Carvalho & da Silva, 2006; Johnson, 2004; Koike & Gualda, 2008). Consequently, Carvalho (2002, 2011) has called for more empirical evidence to shed light on the nature of CLI between Spanish and Portuguese. This dissertation, consisting of three main studies, seeks to answer this call by examining the effects of language background on L3 Portuguese acquisition among three groups of Spanish-speaking bilinguals: L1 Spanish (L1S) bilinguals, L2 Spanish (L2S) bilinguals, and heritage speakers of Spanish (HS bilinguals). Results from both quantitative and qualitative analyses of questionnaire data from the first study suggest that although all participants view Spanish as the principal source of CLI in L3 Portuguese acquisition, L2S bilinguals and HS bilinguals perceive the role of Spanish as significantly more facilitative when learning Portuguese than do L1S bilinguals. The second and third studies used a sentence completion task and a preference/grammaticality judgment task (see Ayoun, 2000) to measure bilingual students' knowledge of mood distinctions in Spanish in obligatory and non-obligatory contexts, respectively, and how they transfer that knowledge to Portuguese. Results indicate that the L2S group scored significantly lower on both measures of mood distinctions in obligatory contexts in Spanish, but transferred over more of their knowledge to Portuguese than either the L1S or HS groups. Similarly, results suggest that L2S bilinguals do not understand the variable nature of mood distinctions in non-obligatory environments, but show almost identical strategies of mood selection in both Spanish and Portuguese. In contrast, L1S and HS bilinguals display knowledge of the variable nature of mood distinctions in Spanish in these contexts but show marked differences in mood selection between the Spanish and Portuguese tasks. The results of these studies contribute to L3 acquisition literature by emphasizing the complexity involved in determining the role of the background languages in CLI and by highlighting the importance of the context of acquisition in CLI. In addition, the results provide more empirical evidence regarding the differences between how different groups of Spanish-speaking bilinguals transfer their knowledge when acquiring L3 Portuguese.