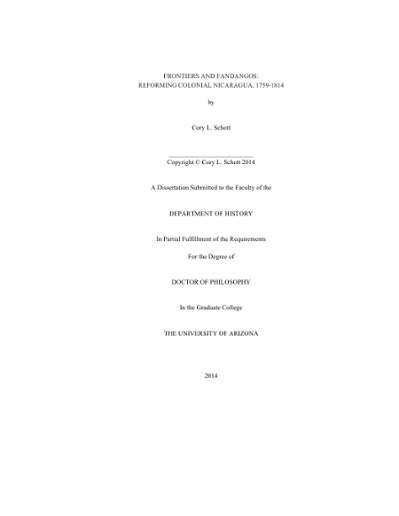 New ideas about trade, society, and the nature of government pulsed throughout the Atlantic World during the eighteenth century. This dissertation explores the relationship between political reforms and life along a colonial frontier. To do so, this project analyzes the effects of new laws imposed by the Spanish monarchy in Central America during the eighteenth century. The policies implemented during this time offered unequal prospects to social groups (e.g., Indians, merchants, soldiers, and farmers), state and non-state institutions (e.g., the Church, town councils, merchant guilds, and regional governments), and individuals to reconfigure traditional local power arrangements. This process, however, produced new conflicts between individuals, communities, and institutions as they attempted to expand and defend their traditional roles in society. I argue Nicaragua's relative isolation from the rest of the Spanish world allowed for the already complex and unwieldy process to become even more difficult. Thus, the majority of the reforms introduced over the eighteenth century remained poorly implemented. Even in areas where royal officials achieved noticeable progress and success, such as the creation of a tobacco monopoly, the new legal regime created new, often unforeseen, problems. In the first part of my dissertation, I examine how vague (and sometimes contradictory) decrees from Spain provided opportunities for new expressions of local power. In the first chapter, I examine the effect that new laws limiting the power of the Church had on local officials and members of the clergy. For example, new ordinance concerning the regulation of private gatherings and dances provoked a major conflict between two pillars of local rule: the bishop and the governor. In the second chapter, I analyze how new laws and decrees contributed to the expansion of an already flourishing black market. New economic ideas, such as ones that established royal monopolies, led to a significant increase in the remittances sent to Spain from Central America; however these same economic policies also eroded local economies and pushed some individuals to participate in illicit trade. The second half of this study analyzes the colonial experiences of indigenous peoples in two very different areas of Central America. In the third chapter, I examine western Nicaragua, where Spanish rule was its strongest and indigenous communities struggled to defend themselves from increasingly onerous demands for labor and tribute. In the fourth chapter, I shift the view to eastern and central Nicaragua and Honduras, where Spain's presence was tenuous or non-existent. There, local indigenous groups capitalized on Spanish fears of a British presence in eastern Central America to extract major concessions and preserve their autonomy while individuals sold their services to the competing empires. This dissertation draws on extensive work with sources, many hitherto untapped, at archives in Spain, Guatemala, the United States, and Nicaragua to demonstrate that residents of Spanish Central America—Spanish, American born Spaniards, natives, mulattos, and mestizos alike—contributed to new understandings of imperial goals that proved that some reforms could be flexible and amendable to local conditions. The legal battles, Church records, military reports, and pleas to the king also highlight shifting ideas about the political, economic, and social organization of society. Beyond its contribution to the limited studies that focus on Nicaragua during the colonial period, my dissertation adds to the broader, comparative fields of colonial studies, economic history, the study of borderlands and frontiers, and the Atlantic World.