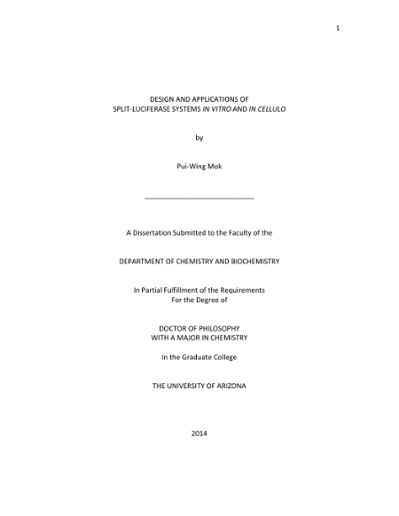 Split-protein reassembly methods allow for the detection of a variety of macromolecular interactions in vitro, in cellulo and in vivo. Spilt-protein reporters, such as split-firefly luciferase (Fluc), depend upon the conditional reassembly of the genetically fragmented enzyme. The two fragments of Fluc conditionally reassemble and regain activity when protein domains appended to the N-terminal and C-terminal Fluc fragments interact. Our laboratory has previously reported the use of the split-Fluc system in the detection of protein-protein, protein-nucleic acid, and protein-small molecule interactions. Herein, I describe further developments in the split-Fluc system as applied to the specific detection of DNA, DNA modifications, and small molecule kinase inhibitors both in vitro and in cellulo. We have previously developed one of the first direct methods to detect any double stranded DNA sequence by attaching DNA binding domains, specifically designed Cys₂-His₂ zinc finger domains, to split-Fluc fragments. We previously discovered that designed Cys₂-His₂ zinc fingers were not specific for targeting a variety of promoter sequences. In order to improve DNA detection, I have designed and tested split-Fluc sensors against several relevant DNA targets using both designed zinc fingers and transcription activator-like effectors (TALEs). The results demonstrate that TALEs allow for significantly higher specificity than zinc fingers and provide a significant improvement for designing sequence specific split-Fluc systems for a variety of applications such as the detection of DNA methylation. The methylation at cytosine-guanine (CpG) dinucleotides in DNA is associated with transcriptional repression in normal cells. Aberrant changes in the mCpG levels on the promoter regions of tumor suppressor genes have been linked to cancer. We have previously shown that a sequence-specific mCpG split-Fluc sensor can be designed by attaching one fragment of the split-Fluc to a zinc finger and another fragment to the methyl-binding domain (MBD) protein, which selectively binds mCpGs. In the long term we wanted to improve these sensors and focused upon understanding the details of MBD binding to mCpG sites. I have completed a complete alanine-scan of the MBD domain using our split-Fluc systems that allows for determining how each residue in MBD1 contributes to mCpG DNA binding. The results showed that numerous residues being necessary for mCpG recognition that have not been previously identified, especially residues that likely contribute to an essential hydrophobic core. These alanine scanning results along with the improvements in DNA recognition with TALEs will potentially allow for the design and selection of more selective mCpG sensors. In a further area related to DNA modifications, in this case DNA damage, we have developed split-Fluc sensors for detecting the post-translational modification on proteins, poly(ADP-ribosyl)ation utilizing PAR-binding zinc fingers of the protein APLF. I have designed and tested a variety of PAR binding sensors and also demonstrated the utility of these sensors for measuring PAR in mammalian cells upon induction of DNA damage. In a separate area, our laboratory has been interested in developing methods for understanding the selectivity of small molecule kinase inhibitors using split-Fluc methods. Protein kinases catalyze the transfer of the ɣ-phosphate group from ATP to an acceptor protein and are involved in almost all signal transduction events. The deregulation of protein kinases is associated with many diseases, particularly cancer, and there has been tremendous interest in developing kinase inhibitors for therapeutic use. One of the main challenges is the ability to understand inhibitor selectivity as the >500 protein kinases in human possess very similar structures especially at the ATP-binding site targeted by small molecules. Our laboratory has previously reported an in vitro three-hybrid screen for protein kinase inhibitors, where one split-Fluc fragment is attached to a protein kinase, and the other is attached to the peptide Fos. A chemical inducer of dimerization (CID), composed of a peptide Jun, which dimerizes with Fos, as well as the ATP-binding kinase ligand, induces the formation of a three-hybrid complex that reassembles the split-Fluc. Small molecule inhibitors can be identified by their ability to prevent the formation of the three-hybrid system, resulting in reduced luciferase activity. There are few direct methods to interrogate small molecule binding in mammalian cells. In order to interrogate inhibitors in cells, we have developed a cell-permeable CID by replacing the Fos/Jun interaction with the E. coli dihydrofolate reductase-trimethoprim interaction. I have demonstrated that this new split-Fluc based three-hybrid system can be used to profile kinase inhibitors in a variety of cell lines.