On the Systematics of the North American Ground Beetle Genus Rhadine Leconte (Coleoptera: Carabidae: Platynini) with Emphasis on the Sky Island Fauna of Arizona 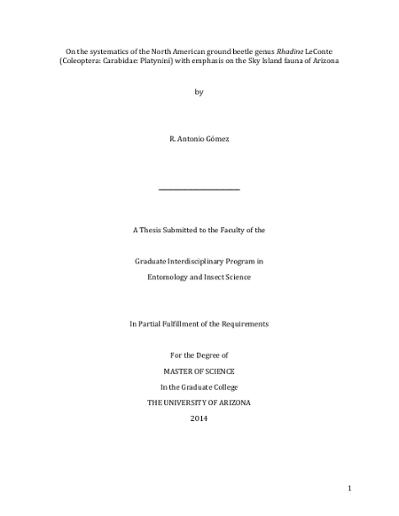 Rhadine is a Nearctic lineage of flightless ground beetles in the tribe Platynini notable for the slender and elongate habitus of the adults and, in the Southwest, the habitat preferences of many species, with several mountaintop endemics as well as microphthalmous species known from caves in central Texas. The genus is in need of a modern taxonomic revision as species identifications remain challenging, and a phylogenetic hypothesis for the overall structure of the group is needed in order to better understand the group's evolutionary history and test whether subterranean Rhadine are a monophyletic clade or not. To this end, a multigene phylogeny of Rhadine was inferred based on ~2.4-kb of aligned nucleotide sites from 3 molecular markers: cytochrome c oxidase subunit I (COI), 28S ribosomal DNA (28S), and carbamoylphosphate synthetase domain of the rudimentary gene (CAD). These gene fragments were obtained for 30 species or putative species of Rhadine as well as from members of their putative sister group, Tanystoma. Rhadine as currently circumscribed is reconstructed as paraphyletic with two species of subterranean beetles from caves in northern Mexico being resolved outside of Rhadine + Tanystoma. Rhadine sensu stricto (s. str.) is resolved with high support across analyses and is composed of two reciprocally monophyletic clades, clade I and II, the second of which is generally recovered in most analyses. Clade I includes those Rhadine with adult morphological characters defining the dissecta-, larvalis-, and subterranea-groups as well as a clade of macropthalmous subterranean perlevis-group species. Clade II, although not as robust as clade I, contains several surface-dwelling species from the western United States in the jejuna-, nivalis-, and perlevis-groups in addition to lineages of exclusively macropthalmous subterranean Rhadine. The troglobitic, cave-restricted, Rhadine classified in the subterranea-group are reconstructed in two different clades, and the clade contained within clade I also includes several species of large-eyed cavernicolous Rhadine. Those with a slender habitus (e.g., R. exilis, R. subterranea, R. austinica) evolved independently at least three times. Major biogeographic and evolutionary patterns based on these molecular results include: subterranea-group Rhadine north of the Colorado River in Texas (which all lack lateral pronotal setae) are found to comprise a monophyletic group, beetles in caves south of the Colorado River likely form another monophyletic group, and the "species pairs" of troglobitic Rhadine known to occur in the same caves that were sampled in our study are not resolved as each other's closest relatives suggesting that these caves were colonized independently by more than one lineage of Rhadine. The fine-scale attention given to populations of Rhadine isolated on mountain tops in the Madrean Sky Island region suggests that there is a great deal of genetic diversity among these lineages. In addition, these populations are resolved as reciprocally monophyletic with high support across all analyses. Haplotype networks constructed for these populations and compared with those of other described species for the same gene fragments reveal similar genetic distances between separate Sky Island Rhadine as compared to distances between described species from throughout the tree. Preliminary divergence time estimates of the Rhadine-Tanystoma lineage based on relaxed molecular clock analyses support a Miocene age for Rhadine and the Rhadine-Tanystoma lineage, with the crown ages of clade I and II being similar though not identical. All subterranean clade I Rhadine are dated to have begun diversifying within approximately the past 5 million years (Pliocene), an age that is compatible with the stratigraphy of the caves in the Balcones Escarpment. In addition, divergence estimates for the members of this clade support the climactic relict hypothesis, as they diversified during rapid temperature fluctuations during the Quaternary. However, the ages of the high altitude Sky Island Rhadine are estimated to be older than the most recent glacial maximum, suggesting that these distinct clades are considerably older than initially thought. We also performed character correlation tests using our phylogeny to test for patterns in form associated with cave habit and did not find statistical significance between subterranean habit and microphthalmy nor habit and development of the foveae of the mentum.Morphological characters that have been traditionally used to classify the genus into species groups were shown to be convergent in many cases. Despite these well-supported molecular clades, few morphological characters are consistent across all members, posing a challenge to the construction of identification tools. Nevertheless, a tentative update to the classification based on our findings is presented, and the future goals for reconstructing the phylogeny of Rhadine are discussed.