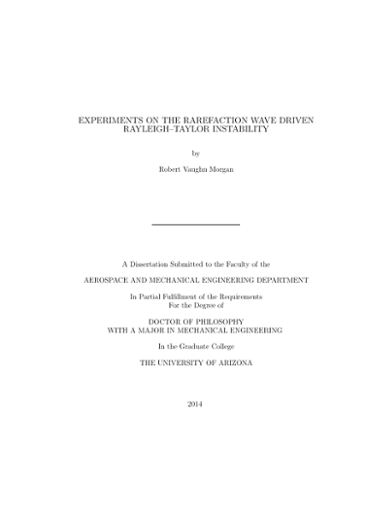 Experiments are presented in which the diffuse interface between two gases is made Rayleigh-Taylor unstable by interaction with a rarefaction wave. The apparatus used consists of a test section where the counter-flow of light and heavy gases generates a diffuse, stably stratified interface. A tank attached to the bottom of the apparatus is evacuated, and when an appropriate pressure is reached, the interface is perturbed using either a horizontal or a vertical oscillation technique to produce 2D, 3D, and multi-mode perturbations. A solenoid plunger fires an arrowhead which ruptures a membrane, generating a rarefaction wave that travels upward toward the interface. When the rarefaction wave impacts the interface, the interface accelerates down toward the vacuum tank, and the Rayleigh-Taylor instability and mixing develop in the test section. The instability evolution and mixing are recorded using high-speed CMOS cameras and planar laser Mie scattering of smoke particles seeded in the heavy gas. Additional visualization is undertaken with a high-speed shadowgraph system using three CMOS cameras. Interface diffusion thicknesses are recorded using the Rayleigh scattered light of an unexpanded laser beam. Simulations are conducted using a 1D numerical characteristics code based on the method of Hoskin (Meth. Comp. Physics, 3, 1964), and using the LLNL research hydrodynamics code Miranda (Cook, Phys. Fluids, 19, 2007). This 1D code produces Lagrangian interface trajectories while the 2D and 3D simulations using Miranda calculate the growth of perturbations. The theory of Chandrasekhar (Chandrasekhar, Proc. Camb. Phil. Soc., 51, 1955) is extended to capture the effects of diffuse interfaces while including viscosity, and dispersion curves are solved for numerically using a Riccati technique. These solutions show that the method of Duff et al. (Phys. Fluids, 5, 1962) may not accurately describe the growth of single modes for large wavenumbers. For large wavenumbers, when the interface has a large diffusion thickness, perturbations are found to grow with the linear growth rate n = 2Ag/(√πv₀δk²), where A is the Atwood number, g is the acceleration, v₀ is the average kinematic viscosity, δ is the thickness of the interface, and k is the wavenumber of the perturbation. Flat interface experiments exhibit predictable acceleration profiles, but the tail of the rarefaction wave appears at late times reducing the duration of acceleration. Single-mode experiments are conducted for four Atwood numbers including CO₂/SF₆ with A = 0.49, Air/SF₆ with A = 0.63, He/CO₂ with A = 0.82, and He/SF₆ with A = 0.94. Early time results compare well with linear stability theory when non-constant acceleration and diffusion thickness are accounted for. Simulations show good agreement with experiments into the non-linear growth phase. The CO₂/SF₆ and Air/SF₆ experiments show terminal velocity behavior where buoyancy is balanced by drag, but produce Froude numbers larger than those predicted by the Goncharov model (Phys. Rev. Lett., 88, 2002). Using the Mikaelian model (Phys. Fluids, 21, 2009), improved asymptotic Froude numbers are found. The He/CO₂ and He/SF₆ experiments exhibit free-fall behavior, accelerating freely without external forces, with spike amplitudes proportional to the displacement of the unperturbed interface. Single-mode experiments conducted with 3D perturbations using CO₂/SF₆ and Air/SF₆ show good agreement with linear stability theory when non-constant acceleration and diffusion thickness are accounted for. Simulations and the model of Mikaelian predict the growth of the spikes up until late time, while the 3D bubbles reach a terminal velocity more quickly than in simulations. Multi-mode experiments were conducted using Air/SF₆. Multi-mode experiments exhibit nearly t² growth at early times which decays. Using extraction techniques that account for variable acceleration, alpha values are found between ɑ = 0.02 and ɑ = 0.04. These alpha values are lower than are seen for most experiments, but are similar to ɑ values seen in miscible experiments.