The Influence of Unfamiliar Orthography on L2 Phonolexical Acquisition 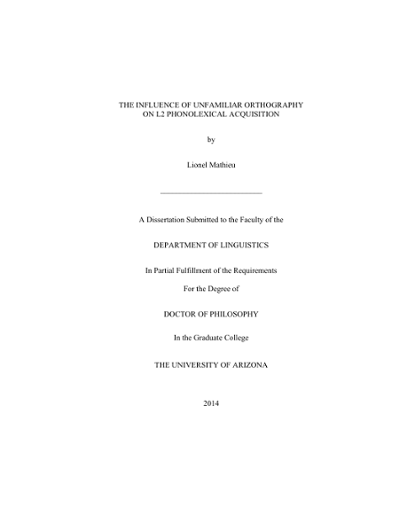 Recent studies in the acquisition of a second language (L2) phonology have revealed that orthography can influence, both positively and negatively, the way L2 learners come to establish target-like lexical representations. The majority of these studies, however, involve language pairs relying on a Roman-based script. In comparison, the influence of a foreign or unfamiliar written representation on L2 phonolexical acquisition remains understudied. This dissertation aims to fill this gap. CHAPTER 2 considers the effects of multiple scripts (e.g. Arabic, Cyrillic, Roman-Maltese, etc.) on the acquisition of the Arabic voiceless pharyngeal fricative /ħ/ and the voiceless uvular fricative /χ/ word-initially. Monolingual native speakers of English participated in a set of five word-learning experiments where they were instructed to learn six pairs of minimally contrastive words, each associated with a unique visual referent. In each experiment, a different script configuration was manipulated. After an initial learning phase, participants were then tested on their phonological acquisition of these L2 minimal pairs. Results show significant differences in phonological accuracy between groups of learners exposed to varying degrees of script unfamiliarity. Specifically, complete script foreignness exerted an inhibitory effect on L2 phonolexical acquisition, while semi-foreign scripts exercised differential inhibitory effects based on whether grapheme-phoneme correspondences (GPCs) also activated L1 phonological units. Two follow-up spelling experiments were also conducted in an attempt to find a more intuitive, symbolic representation of these L2 phonemes. While spellers managed to find various ways to symbolically encode /χ/-words from /ħ/-words, when presented in minimal pairs (but not when presented randomly), no form-consistent pattern emerged from their spelling renditions. These spelling experiments nevertheless support the interpretation that L1 GPCs are likely activated in the course of L2 phonological processing. CHAPTER 3 examines the acquisition of another nonnative phonological contrast, that of Japanese singleton/geminate consonants word-medially. In another set of five word-learning experiments manipulating various aspects of unfamiliar scripts (e.g. Hiragana, Roman/Cyrillic blended), it was found that the acquisition of such a length-based contrast was significantly affected by the foreign written input only when the unfamiliar characters encoding the contrast were graphically highlighted (by way of font coloring and underline) or when they did not convey any information about the durational dimension of the L2 contrast (i.e. when both singletons and geminates were represented with a single character, instead of two for the geminates). These inhibitory effects show that learners are susceptible to be confused by small details featured in unfamiliar written representations presented to them in the course of L2 phonoloxical acquisition. Similar to Chapter 2, two follow-up spelling experiments were conducted. Here, spellers failed to symbolically mark a difference between singleton and geminate auditory items, whether they were presented randomly or in minimal pairs. This lack of differentiation in writing suggests that a consonantal singleton/geminate contrast is a priori not so intuitive to native English speakers. The contributions of this dissertation are manifold. First, the present results provide strong evidence that, aside from recognized acoustic and phonological features influencing the acquisition of a second language sound system, extra-linguistic elements such as written representations also contribute to the acquisitional experience of L2 learners. Furthermore, such findings show that exposure to unfamiliar written representations can significantly inhibit the successful creation of target-like phonological representations, an outcome that has thus far not been attested. Second, it provides additional and complementary research in the subfield of L2 acquisition dealing with the interaction of phonological and orthographic knowledge. The work presented here indeed expands the scope of L2 contrasts and script treatments thus far investigated. Third, implications for second language teaching and loanword phonology can be envisaged. Methods geared towards the acquisition of L2 sounds for instance could be designed taking into account the results obtained here, namely, the fact that a foreign written support may not always be beneficial to learners, depending on the degree of familiarity with the L2 writing system.