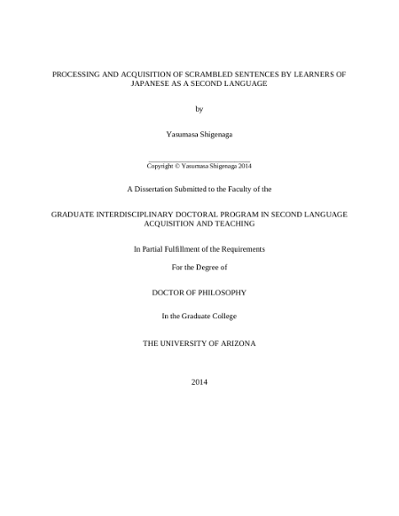 The Japanese language exhibits a free word-order phenomenon called scrambling. Because each noun phrase (NP) is case-marked with postpositional particles, it allows a freer word order than such languages as English. For simple transitive sentences, Subject-Object-Verb is the canonical word order while OSV is the scrambled word order. Previous studies with native speaker (NS) children have found that they go through a developmental stage during which they consistently misunderstand scrambled sentences, taking the first NP in OSV sentences to be the subject. It has also been found that NS adults experience slowdowns in reading and comprehending scrambled sentences. However, investigations into the processing of scrambled sentences by second language (L2) learners have been scarce, and it is not entirely clear how scrambled sentences are processed and acquired by L2 learners. This three-article dissertation aimed at investigating how simple transitive sentences with a scrambled word order (i.e., OSV) are processed and acquired by L2 learners whose native language is English. The first article (Chapter 2) examined L2 learners’ grammatical knowledge and production performance of the OSV sentences through two tasks (fill-in-the-blank and picture description). The results indicated a positive relationship between the learners’ general proficiency in Japanese and their knowledge/production performance of the OSV sentences, although there was a rather large individual difference even within proficiency groups. It was also found that the difficulty in producing OSV sentences was mostly due to a lack of grammatical knowledge, but the relationship of grammatical knowledge and production performance interacted with the types of sentences. For reversible sentences (in which both the subject and object NPs are animate), there was evidence that errors in the production of OSV sentences were caused by the overuse of the canonical template (i.e., SOV). For non-reversible sentences (in which the subject NP is animate and the object NP is inanimate), on the other hand, there was little evidence that a processing problem such as the overuse of the SOV template caused the production difficulty. The second article (Chapter 3) examined the comprehension processes of OSV sentences. While the results of a pilot study (sentence correctness decision task) indicated that both the L2 learners and NSs took longer to read and comprehend OSV sentences than SOV sentences, the results of a self-paced reading task suggested that the processing of OSV sentences by L2 learners might be quite different from that of NSs. The NS participants read more slowly at the second NP position when they read the OSV sentences. On the other hand, the L2 learners, regardless of their proficiency level, did not show such slowdowns. However, the data provided evidence that the advanced L2 learners integrated the case particles more consistently in their sentence comprehension than the learners with lower proficiency. The third article (Chapter 4) examined whether a psycholinguistic task (syntactic persistence with picture description) might facilitate the production of scrambled sentences among L2 learners, for the purpose of exploring the possibility of using such a method as an L2 instructional tool. While the main task (Task 4, which used regular SOV/OSV sentences as primes) was not very effective in eliciting the production of OSV sentences, the follow-up task (Task 6, which used questions in SOV/OSV orders as primes) observed a more positive effect of syntactic persistence. Based on the results, explicit instruction and practice on scrambling is suggested. Since processing of scrambled sentences requires that L2 learners be aware of the functions of case markers (and other postpositional particles) instead of relying on the canonical template, such explicit instruction and practice may also contribute to the acquisition of the particles that mark case.