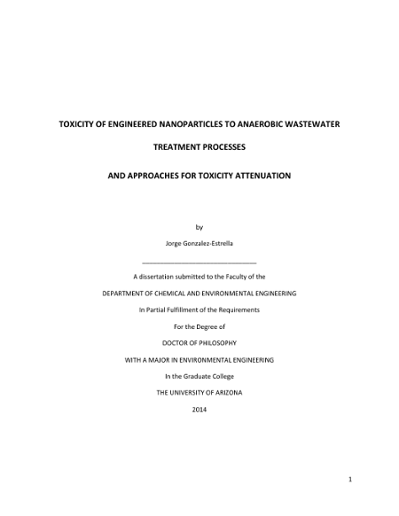 Nanotechnology is an increasing market. Engineered nanoparticles (NPs), materials with at least one dimension between 1 and 100 nm, are produced on a large scale. NPs are vastly used in industrial processes and consumer products and they are most likely discharged into wastewater treatment plants after being used. Activated Sludge is one of the most applied biological wastewater treatment processes for the degradation of organic matter in sewage. Activated sludge produces an excess of sludge that is commonly treated and stabilized by anaerobic digestion. Recent studies have found that NPs accumulate in the activated sludge; thus, there is a potential for the concentrations of NPs to magnify as concentrated waste sludge is fed into the anaerobic digestion process. For this reason, it is important to study the possible toxic effects of NPs on the microorganisms involved in the anaerobic digestion process and the approaches to overcome toxicity if necessary. The present work evaluates the toxic effect of NPs on anaerobic wastewater treatment processes and also presents approaches for toxicity attenuation. The first objective of this dissertation (Chapter III) was to evaluate the toxicity of high concentrations (1, 500 mg L⁻¹) of Ag⁰, Al₂O₃, CeO₂, Cu⁰, CuO, Fe⁰, Fe₂O₃, Mn₂O₃, SiO₂, TiO₂, and ZnO NPs to acetoclastic and hydrogenotrophic methanogens and the effect of a dispersant on the NPs toxicity to methanogens. The findings indicated that only Cu⁰ and ZnO NPs caused severe toxicity to hydrogenotrophic methanogens and Cu⁰, CuO, and ZnO NPs to acetoclastic methanogens. The dispersant did not impact the NPs toxicity. The concentrations of Cu⁰ and ZnO causing 50% of inhibition (IC₅₀) to hydrogenotrophic methanogens were 68 and 250 mg L⁻¹, respectively. Whereas the IC₅₀ values for acetoclastic methanogens were 62, 68, and 179 for Cu⁰, ZnO, and CuO-Cu NPs respectively. These findings indicate that acetoclastic methanogens are more sensitive to NP toxicity compared to hydrogenotrophic methanogens and that Cu⁰ and ZnO NPs are highly toxic to both. Additionally, it was observed that the toxicity of any given metal was highly correlated with its final dissolved concentration in the assay irrespective of whether it was initially added as a NP or chloride salt, indicating that corrosion and dissolution of metals from NPs may have been responsible for the toxicity. The second objective of this dissertation (Chapter IV) was to evaluate the Cu⁰ NP toxicity to anaerobic microorganisms of wastewater treatment processes. Cu⁰ is known to be toxic to methanogens; nonetheless, little is known about its toxic effects on microorganisms of upper trophic levels of anaerobic digestion or other anaerobic process used for nitrogen removal. This specific objective evaluated Cu⁰ NP toxicity to glucose fermentation, syntrophic propionic oxidation, methanogenesis, denitrification and anaerobic ammonium oxidation (anammox). Chapter IV showed that anammox and glucose fermentation were the least and most inhibited processes with inhibition constants (K(i)) values of 0.324 and 0.004 mM of added Cu⁰ NPs, respectively. The Ki values obtained from the residual soluble concentration of the parallel experiments using CuCl₂ indicated that Cu⁰ NP toxicity is most likely caused by the release of soluble ions for each one of the microorganisms tested. The results taken as a whole demonstrate that Cu⁰ NPs are toxic to a variety of anaerobic microorganisms of wastewater treatment processes. The third objective of this document (Chapter V) was to study the role of biogenic sulfide in attenuating Cu⁰ and ZnO NP toxicity to acetoclastic methanogens. Previous literature results and research presented in this dissertation indicated that the release of soluble ions from Cu and ZnO NPs cause toxicity to methanogens. In the past, the application of sulfide to precipitate heavy metals as inert non-soluble sulfides was used to attenuate the toxicity of Cu and Zn salts. Building on this principle, Chapter V evaluated the toxicity of Cu⁰ and ZnO NPs in sulfate-containing (0.4 mM) and sulfate-free conditions. The results show that Cu⁰ and ZnO were 7 and 14x less toxic in sulfate-containing than in sulfate-free assays as indicated by the differences in K(i) values. The K(i) values obtained based on the residual metal concentration of the sulfate-free and sulfate-containing assays were very similar, indicating that the toxicity is well correlated with the release of soluble ions. Overall, this study demonstrated that biogenic sulfide is an effective attenuator of Cu⁰ and ZnO NP toxicity to acetoclastic methanogens. Finally, the last objective (Chapter VI) of this dissertation was to evaluate the effect of iron sulfide (FeS) on the attenuation of Cu⁰ and ZnO toxicity to acetoclastic methanogens. FeS is formed by the reaction of iron(II) and sulfide. This reaction is common in anaerobic sediments where the reduction of iron(III) to iron(II) and sulfate to sulfide occurs. FeS plays a key role controlling the soluble concentrations of heavy metals and thus their toxic effects in aquatic sediments. This study evaluated the application of FeS as an approach to attenuate Cu⁰ and ZnO NP toxicity and their salt analogs to acetoclastic methanogens. Two particle sizes, coarse FeS (FeS-c, 500-1200 µm) and fine FeS (FeS-f, 25-75 µm) were synthesized and used in this study. The results showed 2.5x less FeS-f than FeS-c was required to recover the methanogenic activity to the same extent from the exposure to highly inhibitory concentrations of CuCl₂ and ZnCl₂ (0.2 mM). The results also showed that a molar ratio of FeS-f/Cu⁰, FeS-f/ZnO, FeS-f/Zn Cl₂, and FeS-f/CuCl₂ of 3, 3, 6, and 12 respectively, was necessary to provide a high recovery of methanogenic activity (>75%). The excess of FeS needed to overcome the toxicity indicates that not all the sulfide in FeS was readily available to attenuate the toxicity. Overall, Chapter VI demonstrated that FeS is an effective attenuator of the toxicity of Cu⁰ NP and ZnO NPs and their salt analogs to methanogens, albeit molar excesses of FeS were required.