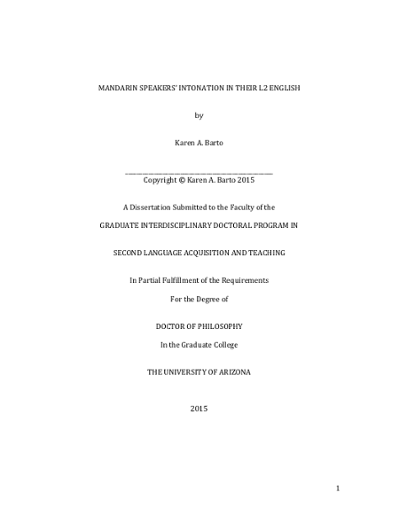 In the field of second language acquisition, a great deal of work has been done on first (L1) to second language (L2) transfer of linguistic patterns from various levels of language, ranging from syntactic (i.e., Clahsen & Felser, 2006; Dussias, 2003; Nicol et al., 2001) and lexical (i.e. Jiang, 2004; Kroll & Tokowicz, 2001) to sound patterns at the segmental level (i.e. Flege, 1987; Flege & McKay, 2004; see work of Flege and colleagues). However, an area that has previously received less attention is that of L2 intonation, especially that of native speakers of a non-intonation language (some exceptions: Chen, 2007; McGory, 1997; Nguyen et al., 2008). The present study seeks to fill that gap, considering the L2 English intonation patterns of native speakers of Mandarin, a tone language. This work was approached from an experimental phonetic perspective, though it draws from theoretical work on intonation of both phonological and phonetic nature (intonational phonology of Ladd, 2008; see work of Ladd and colleagues, and PENTA of Xu & Xu, 2005; see work of Xu and colleagues). A series of production experiments was undertaken with native English speakers as a control group, and Mandarin speakers of higher proficiency (university students in America). Experiments treated stress patterns at the lexical level through production of target items in narrow focus, as well as treating the changes seen in such target items at different intonational points in sentences, elicited in a broad focus production experiment. In addition, the intonational patterns of questions vs. statements and contrastive focus were investigated. Because Mandarin is a lexical tone language, its speakers may tend to produce lexical items similarly regardless of their intonational situation, implementing a sort of lexical tonal transfer strategy. Even lexical tone languages have complementary intonation patterns, however, and these may also be transferred to English (Chen, 2007; Gussenhoven, 2004; Liu, 2009; McGory, 1997; Xu & Xu, 2005). In fact, results do indicate evidence of transfer at the tonal level, where it appears that a rising tone 2 is mapped onto English stressed syllables, and a falling tone 4 is mapped onto post-stressed syllables. Results also indicate intonational transfer, with a lack of sentence-final lowering in broad focus statements, as well as pitch patterns that can lead to an overall higher register in yes/no questions and post-focal lowering in contrastive focus questions.