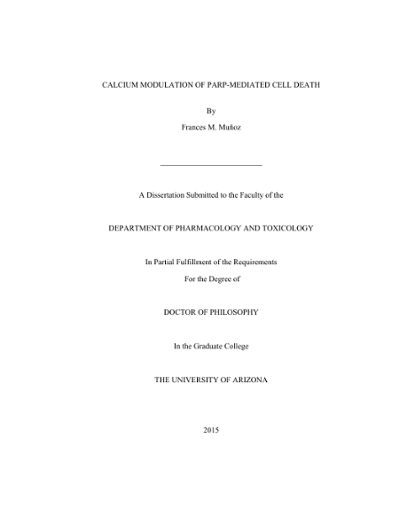 Many pathological conditions, including renal disease, are associated with oxidative stress. 2,3,5-tris(Glutathion-S-yl)hydroquinone (TGHQ), a potent nephrotoxic and nephrocarcinogenic metabolite of benzene and hydroquinone, generates reactive oxygen species (ROS), can cause DNA strand breaks, and the subsequent activation of DNA repair proteins, including poly(ADP-ribose) polymerase (PARP)-1. Under robust oxidative damage, PARP-1 is hyper-activated, which causes elevations in intracellular calcium concentrations (iCa²⁺), NAD⁺ and ATP depletion, and ultimately necrotic cell death. The role of Ca²⁺ in PARP-dependent necrotic cell death remains unclear. We therefore sought to determine the relationship between Ca²⁺ and PARP-1 during TGHQ-induced necrotic cell death in human renal proximal tubule epithelial cells (HK-2). Extracellular Ca²⁺ is responsible for coupling PARP-1 activation to increases in iCa²⁺ during TGHQ-induced cell death. Moreover, organelles such as the endoplasmic reticulum and the mitochondria, which contain intracellular Ca²⁺ stores play no role in increases of iCa²⁺. PARP-1 inhibition attenuates increases in iCa²⁺ induced by TGHQ, and treatment with 2-aminoethoxydiphenyl borate (2-APB), a store-operated Ca²⁺ channel (SOC) inhibitor, restored cell viability, levels of NAD⁺, and attenuated PAR protein-ribosylation (PARylation). Concurrent with SOC activation having a direct effect on PARP-1 activity, and PARP-1 inhibition attenuating increases in iCa²⁺, the results suggest that PARP-1 and SOCs are coupled during TGHQ-induced cell death. We also explored the relationship between SOC activation and PARP-1 downstream of PARP-1 activity. Poly(ADP-ribose)glycohydrolase (PARG), which catalyzes the degradation of PARs to yield free ADP-ribose (ADPR), is known to activate SOCs. Interestingly, siRNA knockdown of PARG modestly increased PAR ribosylation, but did not restore cell viability in the presence of TGHQ, indicating that free ADPR is not responsible for SOC activation in HK-2 cells. Overall, our results suggest that PARP-1 and Ca²⁺ are coupled through SOC entry, and that this relationship may involve alternative PAR-mediated signaling that leads to necrotic cell death. To further elucidate the role of PAR polymers in response to TGHQ, we determined the cellular co-localization of PAR by immunofluorescent staining. PAR polymers originally co-localized in the nucleus, and in the cytosol at later time points. Immunoprecipitation with a pADPr antibody and further analysis via mass spectrometry revealed PARylation of many stress-related proteins and Ca²⁺-related proteins upon TGHQ treatment. We therefore speculate that cytosolic PAR may cause downstream signaling, PARylating proteins that activate store-operated Ca²⁺ entry either directly through Ca²⁺-related proteins or PARylation of stress-related proteins. Thus, PARylation of proteins may contribute to increases in iCa²⁺ concentrations, leading to PARP-1-dependent necrotic cell death. Our studies provide new insight into PARP-mediated necrotic cell death. Ca²⁺ is coupled to PARP-1 hyperactivation through SOCs, where iCa²⁺ increases are independent of PARG activity, demonstrating a novel signaling pathway for PARP-dependent necrotic cell death.