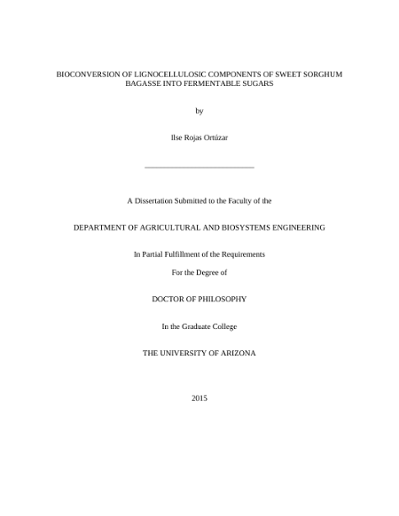 The utilization of lignocellulosic residues to produce renewable energy is an interesting alternative to meet the increasing demand of fuels while at the same time reducing greenhouse gas emissions and climate change. Sweet sorghum bagasse is a lignocellulosic residue composed mainly of cellulose, hemicellulose, and lignin; and it is a promising substrate for ethanol production because its complex carbohydrates may be hydrolyzed and converted into simple sugars, and then fermented into ethanol. However, the utilization of lignocellulosic residues is difficult and inefficient. Lignocellulose is a very stable and compact complex structure, which is linked by β-1,4 and β-1,3 glycosidic bonds. Furthermore, the crystalline and amorphous features of cellulose fibers and the presence of hemicellulose and lignin make the conversion of lignocellulose into fermentable sugars currently impractical at commercial scale. The bioconversion of lignocellulose in nature is performed by microorganisms such as fungi and bacteria, which produce enzymes that are able to degrade lignocellulose. The present study evaluated the bioconversion of lignocellulosic residues of sweet sorghum into simple sugars using filamentous fungi directly in the hydrolysis of the substrate, without prior isolation of the enzymes. The fungus Neurospora crassa and some wild fungi (that grew naturally on sweet sorghum bagasse) were used in this investigation. The effect of the fungi on substrate degradation and the sugars released after hydrolysis were evaluated, and then compared with standard hydrolysis performed by commercial enzymes (isolated cellulases). In addition, different combinations of fungi and enzymes were used to determine the best approach. The main goal was to verify if the fungi were able to attack and break down the lignocellulose structure directly and at a reasonable rate, rather than by the current method utilizing isolated enzymes. The main finding of this study was that the fungi (N. crassa and wild fungi) were able to degrade sweet sorghum bagasse directly; however, in all of the cases, the hydrolysis process was not efficient because the hydrolysis rate was much lower than the enzymatic hydrolysis rate. Hydrolysis using a combination of fungus and commercial enzymes was a good approach, but still not efficient enough for practical use. The best results of combined hydrolysis were obtained when the substrate was under the fungus attack for three days and then, commercial enzymes with low enzymatic activity (7 FPU/g and 25 CBU/g) were added to the solution. These enzymes represent 10% of the current enzymatic activity recommended per gram of substrate. This process reached reasonable levels of sugars (close to 85% of sugars yield obtained by enzymatic hydrolysis); however, the conversion rate was still slower, making the process impractical and more expensive since it took twice the amount of time as commercial enzymes. Furthermore, the wild fungi able to degrade cellulose were isolated, screened, and identified. Two of them belong to the genus Aspergillus, one to the genus Acremonium, and one to the genus Rhizopus. Small concentration of spores-0.5mL- (see Table 4, CHAPTER III- for specific number of spores per mL) did not show any sugar released during hydrolysis of sweet sorghum bagasse. However, when the concentration of spores was increased (to 5mL and 10mL of solution), citric acid production was detected. This finding indicates that those wild fungi were able to degrade lignocellulose, even though no simple sugars were measured, citric acid production is an indicator of fungi growing and utilization of lignocellulose as nutrient. It is assumed that the fungi consume the sugars at the same time they are released, thus they are not detected. The maximum concentration of citric acid (~14.50 mg/mL) was achieved between days 8-11 of hydrolysis. On the other hand, before using lignocellulose, the substrate needed to be pretreated in order to facilitate its decomposition and subsequent hydrolysis. Sweet sorghum bagasse was washed three times to remove any soluble sugars remaining after the juice was extracted from the stalks. Then, another finding of this study was that the first wash solution could be used for ethanol production since the amount of sugars present in it was close to 13°Brix. The ethanol yield after 48 hours of fermentation was in average 6.82mg/mL, which is close to the theoretical ethanol yield. The other two washes were too dilute for commercial ethanol production. In terms of pretreatments, the best one to break down sweet sorghum bagasse was 2% (w/v) NaOH. This pretreatment shows the highest amounts of glucose and xylose released after hydrolysis. Unwashed and untreated bagasse (raw bagasse) did not show any sugar released. In terms of ethanol, 74.50% of the theoretical yield was reached by enzymatic hydrolysis, while 1.10% was reached by hydrolysis using the fungus N. crassa. Finally, it is important to remark that further investigation is needed to improve the direct conversion of lignocellulose into fermentable sugars by fungal enzymes. This approach is a promising technology that needs to be developed and improved to make it efficient and feasible at commercial scale.