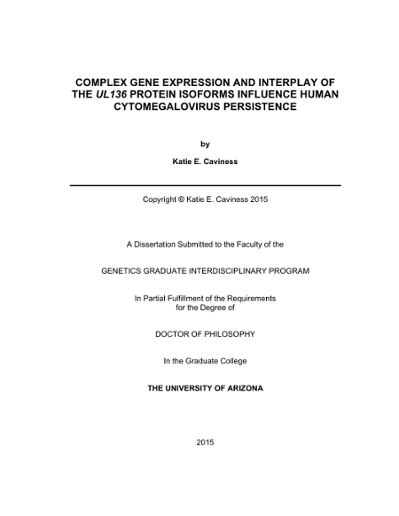 Human cytomegalovirus (HCMV), a beta herpesvirus, persists indefinitely in the human host through a life-long, latent infection. HCMV is associated with life threatening pathologies in the immune naïve or compromised and, therefore, understanding of the mechanisms of viral persistence is imperative to human health. The ULb' region of the HCMV genome is selectively lost in high-passage strains of the virus, yet retained in low-passage strains. As such, the ULb' is hypothesized to play a role in immune evasion, pathogenesis, latency, and dissemination. ULb' encoded viral products are poorly characterized, hindering a mechanistic understanding of HCMV persistence. We previously defined a 3.6-kb locus spanning UL133-UL138 within the ULb' region important to viral latency. UL136 is expressed as five protein isoforms ranging from 33-kDa to 19-kDa, arising from alternative transcription and translation mechanisms. We mapped the origins of each isoform through advanced bacterial artificial chromosome recombineering, where each ATG was disrupted and the resulting UL136 recombinant virus was screened for altered expression of the pUL136 isoforms. Remarkably, 8 of the 11 potential translation initiation sites encoded within the ORF are utilized to create the pUL136 isoforms. The pUL136 isoforms have distinct localization and trafficking patterns within the cell, including varying degrees of Golgi association, suggesting each isoform may interface with different cellular components and pathways. Further characterization of UL136 recombinant viruses revealed a complex, antagonistic relationship between the pUL136 isoforms. In endothelial cells, which are important to viral persistence and dissemination due to their ability to maintain a slow, "smoldering" infection, the 33- and 26-kDa isoforms promote replication, while the 25-kDa isoform enhances their combined activity, and the 23-/19-kDa isoforms repress the activity of the 25-kDa isoform. The pUL136 isoforms are also required for virus maturation in endothelial cells, where the 33-kDa is required both for virion envelopment and efficient formation of the perinuclear viral assembly compartment. In both an in vitro CD34⁺ cell culture model of latency and an in vivo NOD-scid IL2Rɣc^(null) humanized mouse model, a virus lacking the 23-/19-kDa isoforms fails to establish latency, instead replicating and disseminating with increased efficiency while viruses lacking the 33- and 26-kDa isoforms fail to efficiently reactivate or disseminate. Our data suggest that the interplay between the pUL136 isoforms maintains an intricate balance of infection that governs replication, latency, and virus dissemination, which ultimately contributes to the role of the UL133/8 locus in mediating outcomes of HCMV infection.