The Impact of Humanizing Pedagogies and Curriculum Upon the Identities, Civic Engagement, and Political Activism of Chican@ Youth 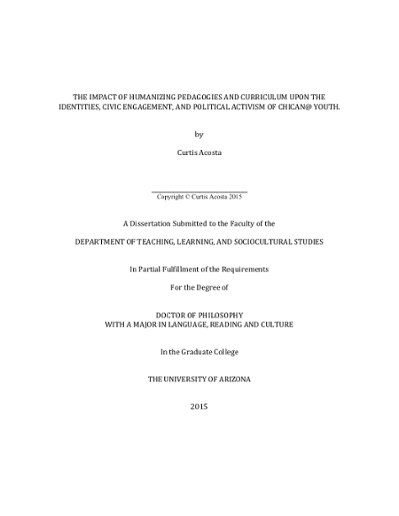 This dissertation presents two participatory action research case studies focusing upon how students viewed the influence of the pedagogy and curriculum of the Chican@ Literature, Art and Social Studies (CLASS) program upon their personal, ethnic, and academic identities. In addition, these studies examined the various ways that youth perceive their role in addressing critical issues in their lives. I conducted this study as a teacher researcher in collaboration with my students. The first study focuses upon eight of the students in the CLASS program as a collective, and the second study is concentrated upon the only student in CLASS who was not of Chican@/Latin@ descent. Both case studies were ten months in duration where I used ethnographic research methods for data collection, which included transcripts from one-on one interviews with the students, as well as artifacts they produced during CLASS. The eight students in this study were an average age of 18.5 years old and all but one had experience in the now defunct Mexican American Studies (MAS) program in Tucson; a program that produced positive educational outcomes in terms of graduation rates and state standardized tests through culturally responsive and critical pedagogy rooted in Indigenous epistemologies (Cabrera, Milem, Jacquette, & Marx, 2014). CLASS was a similar in structure and practice to MAS since I was a teacher in both programs. However, due to unprecedented legislation in Arizona banning Mexican American Studies, CLASS became the last vestiges of the former program outside of public school spaces in order to adhere to the law (Acosta, 2014a; 2014b). Implications include the impact of Indigenous epistemologies, decolonizing and humanizing methodologies and theoretical frameworks upon teaching practices for Chican@ students and other students of color. Furthermore, culturally sustaining pedagogies and critical multicultural and responsive curriculum can increase student engagement and the formation of a positive academic identity (Banks, 2005; Ladson-Billings, 1994; Paris & Alim, 2014; Valenzuela, 1999). Finally, counter narratives (Delgado & Stefancic, 2001), ethnic studies, and social justice curricula (Sleeter, 2011) coupled with Indigenous epistemologies can assist in the development of critical consciousness in students, and serve as a guide to taking collective action in their community and lives.