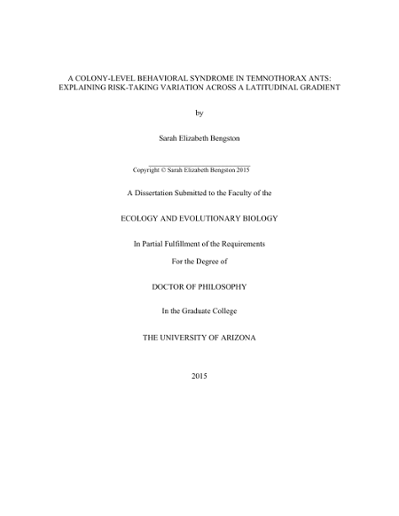 Between individual behavioral variation has been described in nearly every animal taxa where it has been measured. Often, these behavioral variations correlate across contexts, forming a behavioral syndrome. Despite a recent push to better understand the origins and consequences of behavioral syndromes, there still is no cohesive framework that describes this phenomenon. Here, I develop a social insect species into a model for measuring and testing behavioral syndromes at a new level of biological organization; the colony. This builds upon the rich literature describing between-colony variation in behavior and provides novel insights into the evolution of behavioral syndromes. In my first chapter I show that colonies do not vary from one another in foraging distance, nor is foraging distance directly associated with colony size. This was my first step in demonstrating that colony behavioral variation is not simply a byproduct of colony size. In chapter two, I expanded upon this finding by testing colonies both in the lab and in the field for a variety of ecologically relevant behaviors. Here, I found that there was a behavioral syndrome that reflected foraging distance, foraging effort to novel and familiar resources, response to threat and aggression. While there is a gradient of phenotypes, some colonies either travel farther to forage for food and respond more aggressively when confronted with a conspecific invader, but appear to invest less in each given incident or food source. I consider this to be more risk-tolerant; they increase their risk of external mortality for potentially larger pay-offs. On the other hand, risk-averse colonies deploy more foragers to exploit closer resources, increase their overall activity in the response to threat, but avoid travelling farther distances or aggressively engaging invaders. Additionally, there is between population variations in risk-taking phenotype. Across the western United States, colonies at more northern latitudes are more risk-tolerant than colonies at more southern latitudes. In chapter 3, I expand upon this latitudinal gradient in behavioral phenotype by investigating what ecological factors predict a colonies level of risk-tolerance. Specifically, I focused on ecological traits that reflected predation, competition, food resource availability and abiotic stress. I found that competition for nest sites and spatial clustering predicted behavioral type; colonies at high levels of nest site competition or spatial clustering were more risk-tolerant than colonies at lower levels of competition or were more spatially dispersed. In chapter 4, I used a common garden and brood transfer experiment to investigate if the relationship between the ecological environment and behavior was the result of phenotypic plasticity or local adaptation. I show that local adaptation is the most likely explanation, as colonies with more workers from the donor colony are more, behaviorally, like the donor colony than colonies with fewer donor workers. In chapter 5 I test if the risk-taking behavioral syndrome is the result of life history strategy variation. I test the growth rate and energy allocation towards either somatic effort or reproductive effort. I found that colonies which are risk-tolerant also grow faster and dedicate more energy towards reproductive effort, which is consistent with predictions built from life history theory. This body of work shows that behavioral syndromes can exist at a new level of organization, the colony, and that variation in behavioral type is the result of differential selection pressure between populations. This directly connects behavioral syndrome research to life history strategy research. As life history strategy theory is a well-understood field, this represents a true advancement in the field of behavioral syndromes.