Negotiating the Hierarchy of Languages in Ilocandia: The Social and Cognitive Implications of Massive Multilingualism in the Philippines 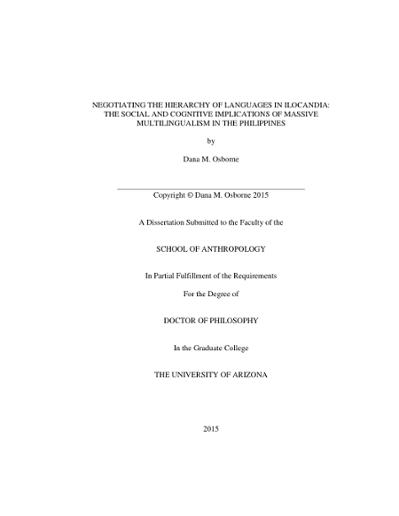 After nearly 400 years of colonial occupation by Spain, the Philippine Islands were signed over to the United States in the 1898 Treaty of Paris along with other Spanish colonies, Guam and Puerto Rico. The American acquisition of the Philippine archipelago marked the beginning of rapid linguistic, social and political transformations that have been at the center of life in the Philippines for the last century, characterized by massive swings in national language policy, the structuration of the modern educational system, political reorganizations and increased involvement in the global economy. The rapid expansion of "education-for-all" during the American Period (1898-1946) set the foundation for the role of education in daily life and created a nation of multilinguals - contemporarily, most people speak, at the very least, functional English and Filipino (official and national languages, respectively) in conjunction with their L1 (mother tongue), of which there are an estimated 170 living varieties throughout the island array. This study focuses on the minority language of Ilocano, a branch of the Malayo-Polynesian (Austronesian) language family and is the third largest minority language spoken in the Philippines with over 9 million speakers spread throughout the islands, having a strong literary tradition and a clearly defined ethnolinguistic homeland in the northernmost region of the island of Luzon. The articles contained in this dissertation variously investigate the linguistic, social, and ideological implications of the last century of contact and colonization among speakers of Ilocano and seek to understand why (and how), in light of colonization, missionization, Americanization, and globalization, minority languages like Ilocano have remained robust. Taken together, these analyses shed light on the dynamic interplay between linguistic, social, and ideological processes as they shape contemporary language practices found among Ilocano speakers negotiating the terms of their local and national participation in a continually shifting social, political, and linguistic landscape.