Children Making Meaning of the World through Emergent Literacies: Bilingualism, Biliteracy, and Biculturalism among the Young Indigenous Children at Tekoá Marangatu, Brazil 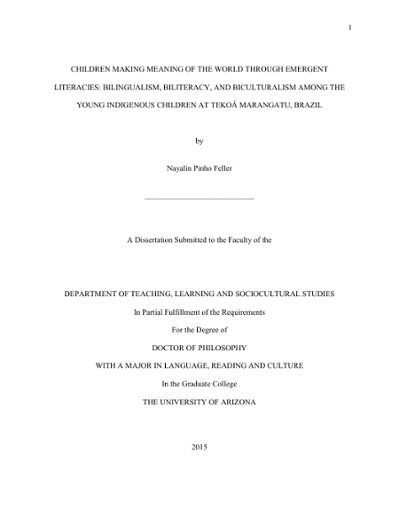 There is a considerable body of research showing that before children enter school they are already equipped with language competencies and concepts developed particularly in their sociocultural environment. Although some studies have explored to some extent the lives of Indigenous children in their socio-cultural contexts, most of these studies do not systematically focus on the early years of their socialization processes. Furthermore, in Brazil, researchers have only recently–in the last 15 years–started to look at the child as a capable and competent being. Thus, the purpose of this study was to document and analyze the socialization practices used by and with Mbya Guarani children in the Tekoá [reservation] Marangatu Indigenous reservation in Imaruí, Brazil, particularly within the school and community contexts. The overarching goal of this dissertation study was to explore the role of Indigenous children's socialization processes in the development of bilingualism, biliteracy, or biculturalism within the school environment and how the bilingual school supports or hinders the development of the Guarani language. In this study, children are seen as social actors (Cohn, 2005a; Marqui, 2012; Mello, 2006; Tassinari, 2011), who transmit knowledge amongst themselves, the adults in their lives, and the different contexts in which they live and experience bilingualism and biculturalism, and in some cases, biliteracy. In this qualitative study, I used ethnographic instruments (Heath & Street, 2008; Seidman, 1998) to document in-depth the several literacy practices performed by first- and third-graders in the Escola Indígena de Ensino Fundamental Tekoá Marangatu (E.I.E.F. Tekoá Marangatu). Data include fieldnotes from participant observations, video and audio recordings, literacy samples (in the form of photographs), and informal interviews, which were collected during three months of fieldwork. Through open coding, I delineated specific domains regarding the use of literacy events (Heath, 1982) and the socialization practices of this specific Indigenous community, following previous empirical studies on immigrant and Indigenous children's emergent literacies (Azuara, 2009; Reyes & Azuara, 2008; Reyes, Alexandra, & Azuara, 2007; Teale, 1986). Through the use of narrative inquiry (Schaafsma & Vinz, 2011), I demonstrate how the role of translanguaging (García & Beardsmore, 2009) and the role that peers (Gillanders & Jiménez, 2004; Halliday, 2004; Moll, 2001) took in the socialization processes of these children are some of the important findings of this study. By also interviewing key members of the school, both Indigenous and non-Indigenous, I was able to understand more in-depth the importance of maintaining these children's cultural heritage at the same time that they learned their native language. In many instances the children in this study relied on more capable peers to understand the worlds and contexts in which they live. As they interacted with each other and with adults, children translanguaged across these multiple contexts as they brought their funds of knowledge (Gonzaléz, Moll, & Amanti, 2005) into the school setting. The modo de ser e viver [way of being and living] in this Indigenous community was intrinsically connected to how they saw themselves as Guarani and how they have adapted to the ways of living on the reservation. Being Guarani encompassed many aspects of their religion, ways of thinking, cosmology, and thus many times it was difficult to separate all of the aspects that composed the Guarani individual. The constant transformation of this reservation has been reshaping the social structures and activities the Guarani perform on a daily basis, yielding new forms of literacy. Even though Portuguese is the dominant language in the school context, both adults and children used Guarani as a way to escape the homogenization almost required by the outside world. Thus, understanding the role that the bilingual school plays in this community was also a key aspect of this research since both adults and children reinforced the use of Indigenous socialization practices within the school setting as a way to adapt to their way of living and being.