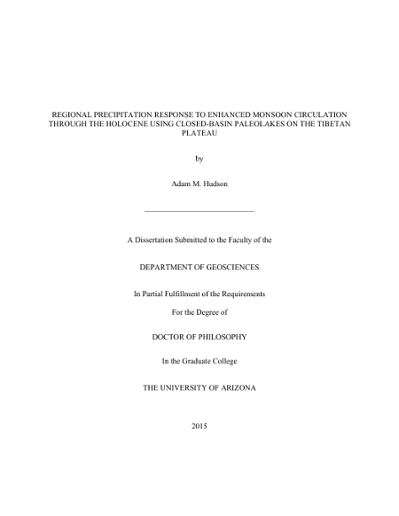 The history of climatic changes in the Asian Summer Monsoon system over the Tibetan Plateau during the Holocene has been the subject of significant research due to the importance of the plateau as the headwaters for many major rivers providing water resources to the surrounding large, populous countries. In general, previous research has concluded that monsoon rainfall and summer temperatures peaked during the early Holocene (9-11 ka BP) in Tibet, coincident with peak Northern Hemisphere summer insolation. Atmospheric teleconnections with upstream Northern Hemisphere westerly circulation patterns influenced by North Atlantic sea surface temperature changes have also been noted at millennial and centennial timescales. However, recent studies have noted that the timing of peak monsoon warmth and wetness during the Holocene are not synchronous across the entirety of the Tibetan Plateau, and studies of modern precipitation indicate several distinct regions of monsoon precipitation variability at interannual scales, suggesting the monsoon response to past and future climate change may be regionally heterogeneous for the plateau. Clear assessment of this regionality within the monsoon climate region is a topic of continuing research, but it has been hindered by lack of climate records in remote areas, dating difficulties, and concerns over the comparability of interpreted climate-proxy relationships between the many different biological, hydrological, and geochemical proxies applied. The first part of this dissertation uses ¹⁴C and U-Th series geochronology, sedimentology, and GIS analysis of exposed lake shoreline sediments surrounding the numerous closed-basin lake systems of the central and western Tibetan Plateau to investigate regional heterogeneity in monsoon rainfall, and to develop a new well-dated lake level record from the Ngangla Ring Tso lake system in the poorly studied southwestern region. The major conclusions are: 1) peak early Holocene monsoon rainfall, recorded by the highest paleoshorelines surrounding 130 lake systems, intensified more relative to today in the western part (west of 86°E longitude) of the Tibetan Plateau when compared to eastern regions, closely following regions of modern rainfall variability; 2) monsoon rainfall in the Ngangla Ring Tso region peaked during the early Holocene insolation maximum, consistent with other records, remained significantly higher than modern until ~6.0 ka BP, but with abrupt reductions in monsoon rainfall associated with North Atlantic ice-rafted debris peaks. The warm and wet period of the early and middle Holocene was also likely coincident with the first major colonization of the Tibetan Plateau by prehistoric humans. Current research suggests early foragers employing stone tools first forayed into the middle elevation areas above 3,000 m elevation on the northeastern fringe of the plateau as early as 14.8 ka BP, and therefore the dominant hypothesis suggests plateau colonization proceeded from this direction, heading westward through the Holocene. However, well studied and dated archaeological sites from the high plateau are exceedingly rare, requiring further investigation. The second part of this dissertation presents new age controls for the Holocene Zhongba microlithic site in the southwestern Tibetan Plateau, using ¹⁴C dating of organic and carbonate-rich paleo-wetlands sediments hosting in situ stone artifacts. The major conclusions of this study are: 1) artifacts at the Zhongba site, which are typologically similar to microlithics across the plateau, can be no older than 6.5 ka BP, consistent with the prevailing east-to-west colonization hypothesis, and 2) microlithic tools continued to be important as late as 1.3 ka BP at the site, even though metal is found in sites of similar age elsewhere in Tibet.