Assessing and Improving the Representation of Hydrologic Processes in Atmospheric, Ocean, and Land Modeling and Dataset Generation 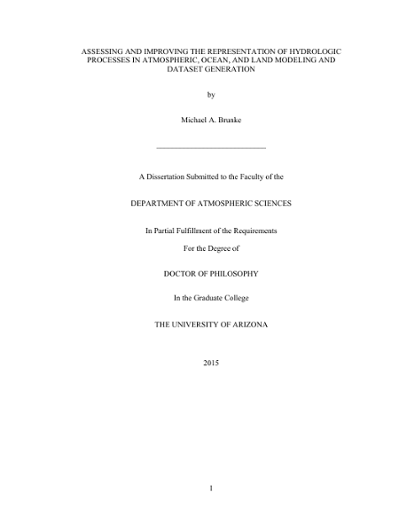 Water is essential to life on Earth. Since water exists in all three phases (solid, liquid, and gas) on Earth, it exists in various reservoirs throughout the planet that compose the hydrologic cycle, and its movement through these reservoirs requires energy. Thus, water is a key component of the energy balance of the Earth. Despite its importance, its representation in modeling and dataset generation is problematic. Here, the depiction of three phenomena, ocean surface turbulent fluxes, humidity inversions, and groundwater, are assessed, and suggestions for improvements of their representations are made. First, ocean surface turbulent fluxes, including those of moisture (latent heat flux), heat (sensible heat flux), and momentum (wind stress), from reanalysis, satellite-derived, and combined products which are commonly used to produce climatologies and to evaluate global climate models are compared to in situ observations from ship cruises to ascertain which products are the least problematic. The National Aeronautics and Space Administration’s reanalysis, the Modern Era Retrospective Analysis for Research and Applications, is the least problematic for all three fluxes, while a couple of others are the least problematic for only one of the three fluxes. Also, the product biases are disaggregated into uncertainties from the grid cell mean quantities, or bulk variables, used plus the residual uncertainties which includes the algorithm uncertainties due to the parameterization used to relate the small-scale turbulent processes to the large-scale bulk variables. The latter contribute the most to the majority of product latent heat fluxes, while both uncertainties can contribute the most to product sensible heat fluxes and wind stress. Thus, both algorithms and bulk variables need to be improved in ocean surface flux datasets. Second, humidity inversion climatologies in five reanalyses are evaluated. Humidity inversions, similar to its thermal counterpart, are layers in which specific humidity increases with height rather than the usual decrease with height. These are especially persistent in the polar regions in autumn and winter. However, Arctic inversions are the strongest in summer corresponding to the time of year that low cloud cover is the highest. Comparing the reanalysis inversions to radiosonde observations reveals some problems with the realization of humidity inversions in reanalyses including the misrepresentation of the diurnal cycle and of the overproduction of inversions in areas outside the polar regions. Finally, the simulation of groundwater in the Community Land Model (CLM) as used in the Community Earth System Model is made more realistic by including variable soil thickness. Because the bottom of the model soil column is placed at effectively bedrock, the unconfined aquifer model currently used in CLM is removed and a zero bottom water flux is put in place. The removal of the unconfined aquifer allows the simulation of groundwater to not be treated separately from soil moisture. The model is most affected where the number of soil layers is reduced from the original constant 10 layers and largely unaffected where the number of soil layers is increased except for baseflow where the mean annual range in rainfall is large.