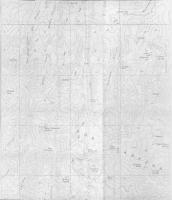 The Dos Cabezas Mountains lie in the northeastern most part of Arizona, in Cochise county. They area medium-sized range of some 150 square miles area, and are almost wholly surrounded by unconsolidated basin-fill material. Most of the range is composed of a number of Precambrian igneous and metamorphic rock masses. Its core is composed of a large, complex, terrain of Cretaceous intrusive volcanic breccias and magmatic aphanites. A large number of Laramide and mid-Tertiary intrusive plutons and dikes cut the range. The Precambrian rocks consist of eight granitoid plutons and three areas of phyllitic and argillitic metamorphosed sediments and volcanics. The metamorphic rocks display a primary greenschist facies dynamothermal metamorphic fabric and a later superimposed biotite-forming hornfelsic thermal metamorphic fabric. The metasediments are mostly phyllites and argillites, but contain over 10,000 feet of metaconglomerate showing marked primary cross-bedding. Many of the metamorphic units are weakly metamorphosed volcanic flows or tuff-contaminated fluvial clastic sediments. These rocks are all classified as Pinal Schist, although some may be equivalent Mazatzal Quartzite. The plutons consist of a pre-Pinal-metamorphism dacite porphyry stock, one quartz monzonite gneiss synkinematic with the Pinal dynamothermal metamorphism, and four gneissic quartz monzonite plutons which appear to post-date the Pinal metamorphism and imply a mild tectonic event at about 1450 million years ago, and two large post-kinematic quartz monzonite stocks which are of circa 1400 million years age. One of these latter stocks displays prominent rapakivi texture; this is considered to be the result of normal magmatic crystallization. The texture is caused by reaction breakdown of hornblende to form biotite among crystals floating in the magma, thereby extracting potassium from the magma and temporarily halting potash feldspar crystallization while allowing plagioclase crystallization. Rb-Sr dating of the plutons reveals that one of the older post-Pinal gneisses is 1470 ± 30 m.y. old, while the rapakivi is 1380 ± 30 m.y. old and the other large stock is 1425 m.y. old and has undergone a marked Sr redistribution at 1000 m.y., ago; this thermal event has biased all the Precambrian K-Ar ages in the northwestern part of the range toward 1000 m.y., also. A large complex assemblage of Cretaceous welded intrusive volcanic breccias underlies 17 square miles of the core of the range. They are largely composed of small angular fragments torn from foundering large fragments of surficial andesite flows, sinking in a fluidized bed. The gas source was a crystallizing magma at depth; entrained quartz and plagioclase crystals from this magma appear in the breccia ground mass. The breccias are cut by a large number of small mafic magmatic instrusives. Several large diabasic and quartz dioritic plutons of Cretaceous or Paleocene age appear in the range and mark Laramide plutonism. K-Ar data from all but the northwestern most part of the Precambrian rocks in the range display a remarkably uniform Paleocene age which reflects a Paleocene thermal metamorphism. Mid-Tertiary plutonism is recorded by several mafic dike sets, including one of "Turkey Track" andesite porphyry, a granodiorite stock, and numerous quartz veins. Basin and Range block faulting is not obvious in the range, but may account for its present high-standing nature, especially along the northern range margin. Dynamothermal metamorphism is recorded strongly in the Pinal Schist, and dynamic tectonism, at circa 1450 million years. Thermal metamorphism is recorded at 1000 million years, circa 55 million years, and circa 35 million years. Plutonism is recorded before Pinal metamorphism, during Pinal metamorphism, then over the 1470-1380 million year interval, in the Cretaceous-Paleocene Laramide interval, and in the mid-Tertiary Oligocene-Miocene interval.