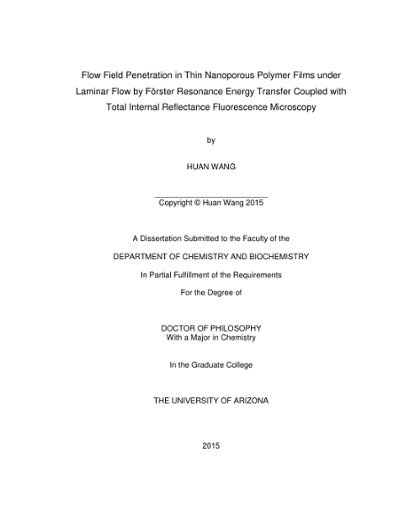 Tethered polymer layers at solid-fluid interfaces are used widely in a variety of surface science applications. Although many of these applications require exposure to dynamic flow conditions, flow field penetration into densely grafted polymer brushes, is still a question open to debate despite the fact that it is a fundamental process crucial to mass transport through these polymer films. Although most theoretical work has indicated flow field penetration into polymer films, with varying predicted penetration depths predicted, the limited experimental attempts to investigate this phenomenon have resulted in inconsistent conclusions due to lack of a proper analytical method. To help resolve this controversy, in this Dissertation, a new spectroscopic method, FRET-TIRFM, based on a combination of Förster resonance energy transfer (FRET) and total internal reflectance fluorescence microscopy (TIRFM), is developed to provide the first direct, quantitative measurements on flow field penetration by measuring linear diffusion coefficients of small molecules through densely grafted, thin poly(N-isopropylacryl-amide) (pNIPAM) films. Decay curves from FRET of the acceptor with a donor covalently attached at the substrate surface were fit to a combined Taylor-Aris-Fickian diffusion model to obtain apparent linear diffusion coefficients of the acceptor molecules for different flow rates. These values can then be used to obtain quantitative estimates of flow field penetration depths. For a pNIPAM surface of 110 nm dry thickness, with a 0.6 chain/nm² grafting density, apparent diffusion coefficients ranging from 1.9-9.1 × 10-12 cm²/s were observed for flow rates ranging from 100 to 3000 μL/min. This increase in apparent diffusion coefficient with applied fluid flow rate is indicative of flow field penetration of the polymer film. The depth of penetration of the flow field is estimated to range from ~6% of the polymer film thickness to ~57% of the film thickness in going from 100 to 3000 μL/min flow rate of a good solvent. Factors other than flow rate that may impact flow field penetration were also investigated using this new FRET-TIRFM method. Solvent quality and polymer brush grafting density are the two most important parameters due to the fact that they influence changes in tethered polymer chain conformation. This work demonstrates that polymer films are most penetrable in a good solvent and least penetrable in a poor solvent under identical flow conditions. These findings are consistent with polymer chain conformational changes going from extended brushes to compact globules. For flow rates ranging from 100 to 3000 μL/min, flow field penetration depth ranges from ~6% of the film thickness to ~57% of film thickness for a good solvent compared to ~4% to ~19% for a poor solvent. Thus, by simply changing solvent quality from good to poor, flow field penetration decreases by about 38%. Grafting density has a less pronounced effect than solvent quality on penetration depth, probably due to the small range of grafting densities chosen for study. However, a roughly 10-20% difference in penetration depth was observed between high density (0.60 chain/nm²) and low density (0.27 chain/nm²) pNIPAM surfaces in the same solvent. Changes in grafting density have a less significant impact in a good solvent compared to a poor solvent. This is most likely caused by the fact that grafting density impacts polymer chain conformation mainly through polymer-polymer repulsion, which becomes less significant in a solvent that better solvates the polymer. For the two extreme cases studied here at flow rates ranging from 100 to 3000 μL/min, the penetration depth is estimated to range from ~4-19% of the original solvent-swollen film thickness for high density pNIPAM films in a poor solvent and from ~7-67% for low density films in a good solvent. One important assumption that underlies all of this work is that the dominant mass transport mechanism for small molecules in dense polymer brushes is diffusion. This assumption was further validated through the use of two different small molecule quenchers, RhB and 2-nitrobenzylalcohol. These molecules are significantly different in size, charge, and structure, and operate by different quenching mechanisms. Despite these differences, the results for flow field penetration are statistically the same for both. These observations validate the assumption of diffusive mass transport in these films.