Complete Recycling and Utilization of Waste Concrete Through Geopolymerization 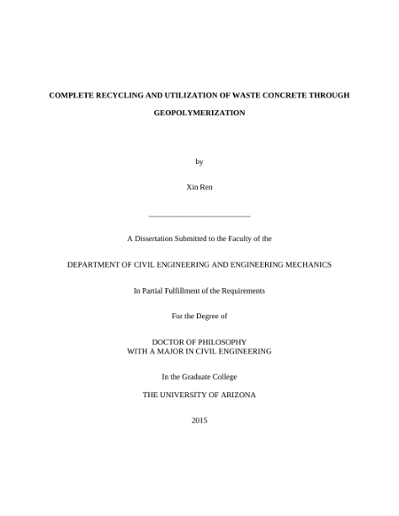 This research investigates complete recycling and utilization of waste concrete to produce new structural concrete through geopolymerization. The investigation was conducted through both macro-and micro/nano-scale studies. First the geopolymer paste synthesized using a mixture of waste concrete fines (WCF) and class F fly ash (FA) as the source material and a mixture of NaOH solution (N) and Na2SiO3 solution (SS) as the alkaline activating agent was studied. Various NaOH concentrations, SS/N ratios, and WCF contents were used to produce geopolymer paste specimens in order to study their effect on the properties of the geopolymer paste. Uniaxial compression tests were conducted to measure the strength of the geopolymer paste specimens. X-ray diffraction (XRD), scanning electron microscopy/energy dispersive X-ray spectroscopy (SEM/EDX), and Fourier transform infrared spectroscopy (FTIR) analyses were performed to investigate the micro/nano-structure, morphology and phase/surface elemental compositions of the geopolymer paste and the effect of calcium (Ca) on them. The results indicate that by using 10 M NaOH solution, SS/N of 2 and 50% WCF, the highest geopolymer paste strength can be obtained. Second, the interfacial transition zones (ITZs) between geopolymer (GP) and recycled aggregates (RA) were studied. Considering that RA consist of the stone particles and the attached paste/mortar from the original ordinary Portland cement (OPC) concrete, both the ITZs between GP and natural aggregate (NA) and those between GP and residual OPC paste/mortar (ROPM) were studied. For comparison, the ITZs between OPC paste and NA and those between OPC paste and ROPM were also investigated. 4-point bending tests were conducted to measure the bonding strength of the different types of ITZs at water to solid (W/S) ratio of 0.30, 0.35 and 0.40 for the geopolymer and OPC pastes after 7 and 14 days curing, respectively. SEM imaging was performed to investigate the microstructure of the ITZs. The results indicate that when NA is used, the bonding strength of both the GP-NA and OPC-NA ITZs decreases with higher water to solid (W/S) ratio. When ROPM is used, higher W/S ratio leads to smaller bonding strength for the GP-ROPM ITZ but greater bonding strength for the OPC-ROPM ITZ. Based on the measured bonding strength values for NA- and ROPM-based ITZs, the bonding strength of the GP-RA and OPC-RA ITZs was estimated by considering the average area coverage of ROPM on the RA surface. The GP-RA ITZ has the highest bonding strength among the different ITZs, implying the great potential for utilizing waste concrete (both the WCF and the RA) to produce geopolymer concrete. Third, based on the studies on geopolymer paste and ITZs, geopolymer concrete (GPC) was produced and studied using WCF and FA as the cementitious material and RA as the aggregate. For comparison, GPC using NA was also produced and studied at similar conditions. Various NaOH concentrations, SS/N ratios, and cement (WCF and FA) to aggregate (C/A) ratios were used to produce GPC specimens in order to study their effect on the behavior of GPC. The effect of water content and curing temperature on the initial setting time and 7-day unconfined compressive strength (UCS) of the GPC was also studied. The results show that the GPC produced from RA has higher UCS than the GPC from NA at both room curing temperature and 35°C curing temperature. Based on this study, it can be concluded that waste concrete can be completely recycled and used to produce new structural concrete based on the geopolymerization technology. Fourth, considering that the Si/Al and Na/Al ratios have great effect on the geopolymerization process and the properties of the final geopolymer product, a study was conducted on copper mine tailings (MT)-based geopolymer containing different amount of aluminum sludge (AS). The results indicate that by including AS and utilizing appropriate amount of NaOH, the UCS can be increased significantly. The main reason is because the addition of AS along with utilization of appropriate amount of NaOH makes both the Si/Al and Na/Al ratios reach the optimum values for geopolymerization, leading to higher degree of geopolymerization and more compact geopolymer microstructure. It is noted that although this study is not directly on waste concrete, it provides useful information for optimizing the design on complete recycling and utilization of waste concrete to produce new GPC. Finally, to better understand the effect of Ca on the geopolymerization process and the properties of geopolymer, molecular dynamics (MD) simulations were performed on geopolymer at different Ca contents. The molecular models at different Ca contents were constructed and uniaxial compression test was then performed on the numerical specimens. The results indicate that MD simulation is an effective tool for studying the effect of Ca on the properties of geopolymer at nano-scale.