Basin Evolution and Exhumation of the Xigaze Forearc and Indus-Yarlung Suture Zone, Tibet 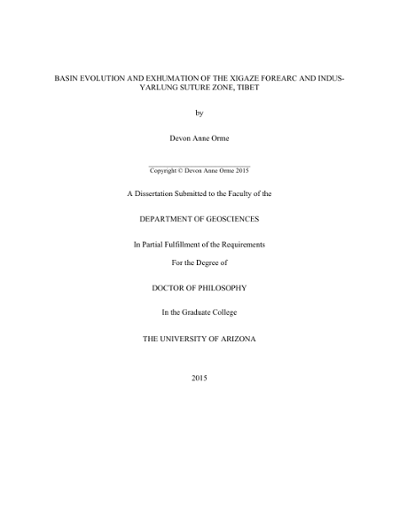 The Xigaze forearc basin in southern Tibet, one of the largest and best-preserved forearc basins on Earth, records upper-plate processes active prior to and following the inter-continental collision between India and Asia. However, the understanding of the timing and mechanisms of forearc development and its evolution following collision is spatially and temporally limited. Fundamental questions remain concerning how the basin formed, its paleogeography prior to collision, its subsidence history and the thermal history of the basin following the initial and ongoing continent-continent collision. Answering these questions is important to reconstructing upper plate dynamics during active subduction of oceanic and continental lithosphere. This dissertation addresses the Early Cretaceous to Pliocene history of the Xigaze forearc, using field mapping, sedimentology, sandstone modal petrography, geohistory analysis, U-Pb detrital zircon geochronology, and low-temperature thermochronology (apatite and zircon (U-Th/He)). Appendix A documents the sedimentology and stratigraphy of Lower Cretaceous to Paleocene strata to identify the relationship between the Yarlung-Tsangpo ophiolite and Xigaze forearc basin, reconstruct the sedimentary environments of the southern margin of Asia during the initial to middle stages of forearc deposition, and use the basin history to evaluate the mechanisms controlling forearc subsidence. In Appendix B, analysis of Eocene sedimentary strata, the youngest preserved in the forearc basin, constrains the timing of collision between Asia and the Tethyan Himalaya (India) to be no later than 58-54 Ma based on the similarity of the U-Pb detrital zircon age spectra and sandstone compositions between the Xigaze forearc and strata deposited atop the passive margin of the Tethyan Himalayan at that time. Apatite and zircon (U-Th)/He thermochronologic results in Appendix C constrain the maximum burial temperature of the basin following collision to ~140-200 °C, which corresponds to depths attainable by sedimentation in the forearc and a Paleogene forearc successor basin. This integrated dataset also identifies the initial stage of post-collisional exhumation during the Early Miocene (~ 20-15 Ma), followed by accelerated cooling during the Late Miocene to Early Pliocene (~ 10-4 Ma). These results suggest the presence of a paleo-Yarlung River and/or intensification of the Asian monsoon during the Early to Late Miocene. The Pliocene cooling signal is the youngest reported to date along the IYSZ and likely reflects increased river incision of the Yarlung-Tsangpo driven by accelerated orogen-parallel extension across structures which cross-cut the IYSZ. Robust interpretation of thermochronologic data requires knowledge about the geologic factors and intrinsic properties of the minerals. Appendix D of this dissertation examines intragranular zonation as a source of anomalously young zircon (U-Th)/He ages from leucogranites that intrude Greater Himalayan Sequence rocks at Ronbguk Valley, north of Mt. Everest. Depth profile laser ablation ICP-MS analysis was used to quantify the U-Th concentration profiles of a series of zoned, single, whole zircon grains and to apply a grain specific zonation-dependent age correction. Zircon grains corrected for zonation yield zircon He ages of 15-17 Ma, in agreement with AFT, ZFT and mica ⁴⁰Ar/³⁹Ar ages from the region. This study highlights the importance of characterizing intragranular zonation, especially in complex, zoned zircons that are typical of crustal melts and high-grade metamorphic rocks. Appendix E synthesis the results from Appendices A-C in the context of a global comparison with other ancient and preserved forearc basins. Results from the Xigaze forearc basin are compared to general models for forearc basin formation, subsidence trends, and preservation. The results show similarities between the Xigaze forearc basin and modern forearc basins, such as the Japan forearc off Honshu Island. The mechanisms driving tectonic subsidence are addressed, but remain an area of frontier research in continental dynamics.