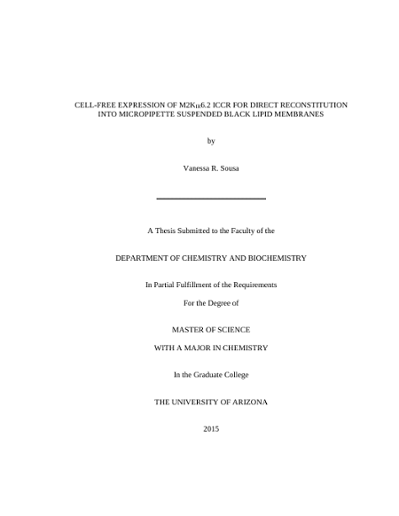 Serving as key players in cell signaling, nearly all cells in the human body contain GPCRs. As the largest and most diverse superfamily of proteins in the human body, GPCRs are linked to some of the most prevalent current disease states including cardiovascular disease, type II diabetes, and various types of cancers. The development of new biosensors capable of simple, specific, sensitive, high-throughput screenings of the ligand-binding events of GPCRs are crucial to the diagnosis and maintenance of such diseases. To this end, this research is focused on the development of a novel biosensor platform incorporating ICCRs reconstituted into BLMs. Although ICCRs have been expressed previously in oocytes and HEK293 cells, no occurrence of cell-free expression has yet been performed. The advantages of such a platform include the specificity and real-time measurement capabilities of GPCRs, the innate sensitivity of electrophysiological ion channel flux measurements, and the simplified cellular mimicking of the BLM and cell-free expression. The majority of the presented research was based in the molecular cloning of M2Kir6.2, an ICCR incorporating a muscarinic acetylcholine receptor (M2), from Xenopus oocyte vector pGH2 into cell-free expression vector pT7CFE1-CGST-HA-His. Much optimization of the cloning procedure (PCR, digestion, and ligation) was necessary involving studies into polymerase fidelity, inclusion of DpnI for degradation of methylated DNA, and ligation parameter alterations in time, temperature, and insert:vector ratios. It was discovered that Deep VentR polymerase was beneficial to preventing mutations within the sequence of M2Kir6.2 during PCR, DpnI was capable of degrading unwanted residual M2Kir6.2 pGH2, and ligation performance was optimal using a 1:1 (insert:vector) ratio and reaction time and temperature of 18 h and 4 °C, respectively. With the successful ligation of M2Kir6.2 into cell-free expression vector pT7, expression of the ICCR via cell-free expression lysate kit was performed with direct reconstitution into a micropipette suspended BLM attempted. Five reconstitution trials were performed with electrophysiological single-channel recording results suggesting ICCR insertion based on ion channel currents of ~ 3 pA and mean open-times of ~ 3 ms observed corresponding to literature values for native Kir6.2 channels. Additionally, a Western blot analysis of the cell-free expression mixture contained products with molecular weights corresponding to monomer (~ 100 kDa) and tetramer (~ 400 kDa) constructs of M2Kir6.2. With the successful optimization of the M2Kir6.2 pT7 cloning procedure, this procedure can be used in future cloning attempts with similar ICCR constructs, such as D2Kir6.2. Although preliminary electrophysiological results suggest ICCR expression and BLM reconstitution, further work needs to be done in controlling the amount of ICCR insertion and optimizing BLM stability. Additionally, in order to confirm the functionality of both M2 and Kir6.2 ligand dose response curves must be performed. The evidence supporting ICCR expression and direct reconstitution into suspended BLMs via cell-free protein expression is both exciting and promising. Not only has this research involved the first cell-free expression of M2Kir6.2 but also has great benefits to the further development of such novel ligand-binding biosensor platforms.