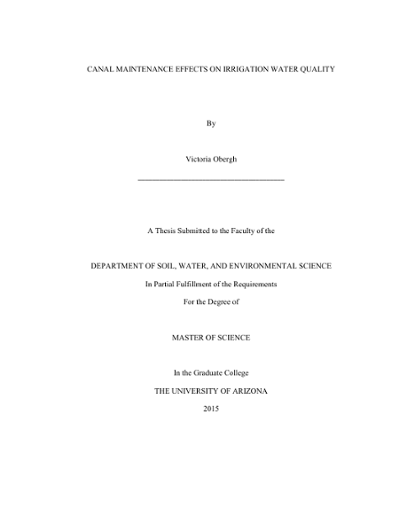 Canal maintenance, involving mechanical removal of sediments and algal growth from canal basins, is necessary for sustaining the viability of the irrigation water delivery system in the Imperial Valley of California. Maintenance activities, however, disturb canal sediments laden with bacteria and can negatively impact water quality downstream. Our work quantified fecal indicator bacteria (Escherichia coli) and pathogens (Salmonella) in canal water prior to, during, and post-maintenance events. The goal of this study was to construct a post-maintenance time matrix that will allow growers downstream to estimate when canal water once again meets water quality guidelines. In addition, we assessed the water quality impacts of lining canals with concrete, which is a costly endeavor in the short term, but may be beneficial in the long term as lined canals do not require routine dredging to maintain canal integrity. During eight maintenance events from March 2013 through August 2014, 22% of 396 water samples collected exceeded the irrigation water quality guidelines (<126 MPN E. coli 100 mL-1) during canal maintenance. During summer months (July and August 2013-2014), E. coli concentrations in water samples commonly reached maximum values (>2419.6 MPN E. coli 100 mL-1), and these samples were more readily collected from unlined canal sampling sites. During winter and spring months, 80.8% of E. coli exceedances for unlined canals met guideline standards in less than 22 hours, while 19.2% of exceedances took longer (up to 48 hours) to return to acceptable levels; in lined sites, 63.6% and 36.4% met guidelines in less than 22 hours and 48 hours, respectively. Summer months showed a different trend: in unlined canal sites, 56.3% of E. coli exceedances met standards within 22 hours and 43.7% within 48 hours; in lined sites, 100% of water samples met standards in less than 22 hours. Unlined sites averaged higher temperatures overall compared to lined sites, and canal water in July (2013) was extremely warm (averaging 32.8°C) and reached human body temperature (37°C) at several unlined sites, a temperature at which enteric bacteria are known to thrive. Culturable Salmonella were detected in water samples collected in summer, with 22.2% of Salmonella-positive samples within 1°C of human body temperature. E. coli concentrations were significantly correlated with temperature and pH in unlined canals only. Unlined canals showed 15.2% of water samples were Salmonella-positive during summer maintenance whereas 1.7% of lined canals were positive. Salmonella significantly correlated with pH in lined canals. Fecal indicators (E. coli) did not predict pathogen (Salmonella) presence. Molecular methods (qPCR) suggested far higher levels of Salmonella when compared to cultural methods, with molecular markers for Salmonella exceeding culturing by more than 600%. The results of this work suggest that growers should exercise caution when irrigating after canal maintenance events, and to be completely certain of acceptable irrigation water quality, should wait for 48 hours following the onset of maintenance (typically 24 hours following the re-introduction of water to the channels) prior to irrigating crops. Further, irrigation district guidelines may consider: 1) disposing of the“first flush”of canal water following maintenance into nearby open areas, rather than sending poor-quality water into the irrigation canal system; 2) collect sediments and algae deposited on canal banks and transport to a secondary location to prevent precipitation runoff and re-introduction of bacteria-laden sediments to canals, and 3) consider the long-term costs and benefits of canal lining.