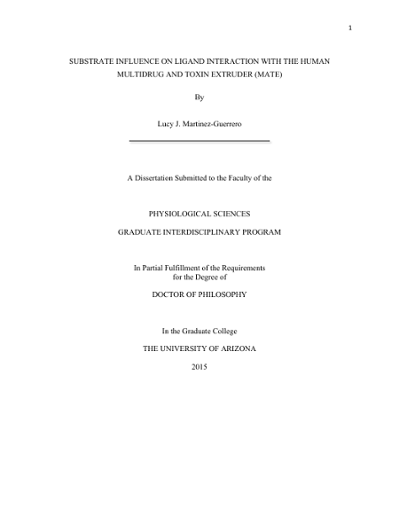 Organic cation (OC) secretion across renal proximal tubules (RPTs) involves basolateral OCT2- mediated uptake from the blood, followed by apical MATE1/2-mediated efflux into the tubule filtrate. Whereas OCT2 supports electrogenic OC uniport, MATE is an OC/H exchanger. OCs make up ~40% of all prescribed drugs and renal secretion plays a major role in clearing them. This study looked at two aims with the intent of resolving two outstanding issues dealing with the mechanism of MATE-mediated OC transport. First: Understanding the nature of intracellular sequestration of OC in cells that express hMATE1 as an integral part of characterizing 'the potential difference of substrate selectivity between the intracellular and extracellular face of MATE1.' Second: Testing whether structurally distinct MATE substrates can display different quantitative profiles of inhibition when interacting with structurally distinct ligands to determine 'the potential influence of the substrate on the profile of ligand interaction with MATE1.' All uptake experiments were realized with CHO cells that stably expressed hMATE1, hMATE2K or hOCT2. By epifluorescence microscopy cultured CHO-hMATE1 cells accumulated the fluorescent OC, N,N,N-trimethyl-2-[methyl(7-nitrobenzo[c][l,2,5]oxadiazol-4- yl)amino]ethanaminium (NBD-MTMA) in the cytoplasm and in a smaller, punctate compartment; accumulation in hOCT2 expressing cells was restricted to the cytoplasm. A second intracellular compartment was also evident in the multicompartmental kinetics of efflux of the prototypic OC, 1-methyl-4-phenylpyridinium, [³H]MPP, from MATE1-expressing CHO cells. Punctate accumulation (20 min) of NBD-MTMA was markedly reduced by coexposure of MATE1-expressing cells with 5 μM bafilomycin (BAF), an inhibitor of the V-Type H-ATPase, and 20 min accumulations of [³H]MPP and [³H]NBD-MTMA were reduced by >30% by coexposure with 5 μM BAF. BAF had no effect on the initial rate of MATE1-mediated uptake of NBD-MTMA (10-300 sec) suggesting that the effect of BAF was a secondary effect involving inhibition of the V-type H-ATPase. The 15 min accumulation of [³H]MPP by isolated single non-perfused rabbit RPTs was also reduced >30% by coexposure to 5 μM BAF. Thus, the native expression in RPTs of MATE protein within endosomes can increase steady-state OC accumulation. However, the rate of [³H]MPP secretion by isolated single perfused rabbit RPTs was not affected by 5 μM BAF suggesting that vesicles loaded with OCs are not likely to recycle into the apical plasma membrane at sufficient rates to provide a parallel pathway for OC secretion. The uptake of three structurally distinct MATE substrates: MPP, triethylmethylammonium (TEMA) and NBD-MTMA into CHO-hMATE1 and CHO-hMATE2K cells was inhibited by three structurally similar cationic ionic liquids (ILs, salts in the liquid state: N-butylpyridinium, NBuPy; 1-methyl-3-butylimidazolium, Bmim; and N-butyl-N-methylpyrrolidinium, BmPy). The three ILs displayed a higher affinity for the pyridinium-based NBuPy (IC50 values, 2-4 μM) than for either the pyrrolidinium- (BmPy; 20-70 μM) or imidazolium-based ILs (Bmim; 15-60 μM). Inhibition of MPP, TEMA, and NBD-MTMA transport by NBuPy was competitive, with comparable Ki values against all substrates. Bmim also competitively blocked the three substrates but with Ki values that differed significantly (20 μM against MPP and 30 μM against NBD-MTMA versus 60 μM against TEMA). By trans-stimulation, all three ILs were transported by both MATE transporters. Together, these data indicate that renal secretion of ILs by the human kidney involves MATE transporters and suggest that the mechanism of transport inhibition is ligand-dependent, supporting the hypothesis that the binding of substrates to MATE transporters involves interaction with a binding surface with multiple binding sites. In order to further verify this hypothesis the uptake of four structurally distinct MATE substrates: MPP, NBD-MTMA, Cimetidine and Metformin into CHO-hMATE1 cells was characterized. Inhibition by ~400 drugs from the NIH clinical collection (NCC) was determined, and the rank order and level of inhibition seen were comparable against all substrates. IC₅₀ were measured for ~20 drugs selected from the NCC using principal component analysis (PCA); their IC₅₀ values were very similar against all four substrates, showing no systematic influence of substrate structure on inhibitory profile. The development and comparison of pharmacophores for each individual substrate revealed no substantial difference among them as proved by cluster analysis, leading to the conclusion that contrary to what was predicted based on the preliminary IL data, the substrates tested appear to have no influence on the inhibitory profile of ligands with hMATE1.