Functions of Drosophila Pak (p21-activated kinase) in Morphogenesis: A Mechanistic Model based on Cellular, Molecular, and Genetic Studies 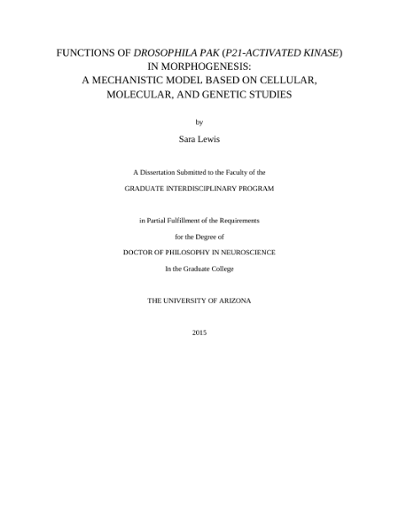 Intellectual disability (ID) is a common phenotype of brain-development disorders and is heterogeneous in etiology with numerous genetic causes. PAK3 is one gene with multiple mutations causing ID. Affected individuals have microcephaly, and other brain-structure defects have been reported. Additionally, PAK3 is in a genetic network with eighteen other genes whose mutations cause ID, suggesting the molecular mechanisms by which PAK3 regulates of cognitive function may be shared by other genetic ID disorders. Studies in rodent models have shown that the orthologs of PAK3 are important for regulating dendrite spine morphology and postnatal brain size. In Drosophila melanogaster, the morphological processes of oogenesis, dorsal closure during embryogenesis, and salivary gland-lumen formation require Pak, the Drosophila ortholog of PAK3. Additionally, Pak is important for development of the subsynaptic reticulum of the neuromuscular junction, sensory axon pathfinding and terminal arborization in the Drosophila central nervous system (CNS). However, the role of Pak in mushroom body (MB) structure and intrinsic neurite arbor morphogenesis, as well as details of the underlying cellular and molecular mechanisms are unknown. To address this gap, I used Drosophila models of PAK3 gene mutations, Pak, and a combination of immunostaining, primary cell culture, and genetic interaction studies to elucidate these mechanisms. I performed a detailed characterization of the previously reported adult Pak phenotypes of decreased survival as well as leg and wing morphology. I found that decreased survival is a low-penetrance phenotype that is enhanced by chromosomes from the same mutagenesis. Defects of the adult wing include folding and misalignment between the layers, blisters, and missing or partial cross veins. The Pak-mutant legs are short and often misdirected in the pupal case with morphological defects in the shape of the leg segments themselves. The mushroom bodies are important insect learning and memory brain structures whose lobes are composed of axon bundles with individual axons bifurcating to form the α and β lobes. Mutations in Pak cause defects in the length, thickness, and direction of the MB α and β lobes. These defects increase in severity during metamorphosis, when neurogenesis and differentiation of these structures occur, suggesting that Pak stabilizes the branches of the α/β mushroom body neurons. Pak-mutant cultured neurons have reduced neurite arbor size with defects in neurite caliber. Initial outgrowth was normal, followed by a decrease in neurite branch number, again supporting the role of Pak in neurite-branch stability. There are defects in the cytoskeleton in growth cones at six hours post-plating as well as in neurons after three days in vitro. The Pak-mutant phenotype severity depends on the phosphorylation status of myosin regulatory light chain, supporting the mechanistic hypothesis that Pak regulates neurite-branch stability by inhibiting myosin light chain kinase. The neuronal phenotype of decreased branch stability suggests a mechanism of excessive retraction as the cellular pathogenesis underlying PAK3 mutation-associated brain disorders. I used western blotting to characterize the protein products of four nonsense mutations in Drosophila Pak to interpret genotype-phenotype relationships. Each allele has molecularly unique consequences: Pak¹¹, stop-codon read through and truncated protein; Pak¹⁶, no read through, but truncated protein; Pak⁶, read through with no truncated protein; Pak ¹⁴, neither readthrough nor truncated protein. Truncated proteins produced by Pak¹¹ and Pak¹⁶ alleles retained partial function for survival, wing blistering, leg morphology, and neurite length. Conversely, truncated protein increased the severity of the mushroom body defects. Truncated proteins have no effect on neuron branch number, wing folding, or vein defects. Together, these results demonstrate a role of Pak in regulating epithelial morphology, brain structure, and neurite arbor size and complexity. These closely resemble features of the human disorder, providing evidence that this is a good genetic model for this cause of ID.