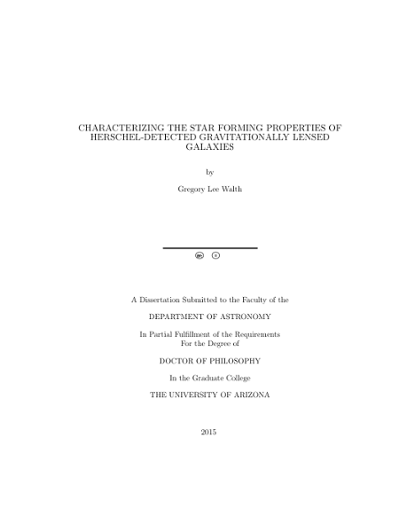 Dusty star forming galaxies (DSFGs), characterized by their far-infrared (far-IR) emission, undergo the largest starbursts in the Universe, contributing to the majority of the cosmic star formation rate density at z = 1−4. The Herschel Space Observatory for the first time was able observe the full far-IR dust emission for a large population of high-redshift DSFGs, thereby accurately measuring their star formation rates. With gravitational lensing, we are able to surpass the Herschel confusion limit and probe intrinsically less luminous and therefore more normal star-forming galaxies. With this goal in mind, we have conducted a large Herschel survey, the Herschel Lensing Survey, of the cores of almost 600 massive galaxy clusters, where the effects of gravitational lensing are the strongest. In this thesis, I present follow-up studies of gravitationally lensed Herschel-detected DSFGs by utilizing multi-wavelength data from optical to radio. Specifically, I characterize the star forming properties of gravitationally lensed DSFGs by using these three subsamples: (1) A gravitationally lensed DSFG galaxy at z = 0.6 in one of the most massive galaxy clusters, Abell S1063 (at z = 0.3), (2) One of the brightest sources in HLS, which is a system of two strongly gravitationally lensed galaxies, one at z = 2.0 (optically faint gravitational arc) and the other at z = 4.7 (triply-imaged galaxy), (3) A sample of the brightest sources in HLS at z = 1−4, in which we detect rest-frame optical nebular emission lines (e.g. Hα, Hβ, [OIII]λλ4959,5007) by utilizing near-IR spectroscopy. The main results from these studies are as follows: (1) In the cluster-lensed DSFG at z = 0.6, discovered in the core of Abell S1063, we identify a luminous (SFR = 10 M⊙/yr) giant (D~1 kpc) HII region similar to those typically found at higher redshift (z~2). We show that the HII region is embedded in a rotating disk and likely formed in isolation, rather than through galaxy interaction, which is observed in local galaxies. We can use this source as a nearby laboratory for star forming regions at z ~ 2, in which more detailed follow-up of this source can help us to understand their origin/properties. (2) We discovered that one of the brightest sources in HLS is a blend of two cluster-lensed DSFGs, one at z = 2.0 (an optically faint arc) and the other at z = 4.7 (triply-imaged galaxy), implying that a sample of bright Herschel sources may have such multiplicity. In the z = 2.0 arc, the sub-arcsecond clumps detected in the SMA image surprisingly do not correspond to the clumps in the JVLA CO(1-0) image. When investigating the CO(1-0) velocity structure, there is a substantial amount of molecular gas (likely a molecular wind/outflow) we find that we find is not associated with star formation. This suggests that the CO morphology in DSFGs could be strongly influenced by molecular outflows resulting in the over-prediction of the amount of the molecular gas available for star formation. In the z = 2.0 arc, we also constrain αCO~4. While this value is normal for galaxies like the Milky Way, it is quite unusual for ULIRGs. This hints that the physical conditions may be much different in the arc from other ULIRGs, which usually have αCO ≈ 0.8.(3) We successfully detect rest-frame optical emission lines in 8 gravitationally lensed DSFGs at z = 1−4 using ground-based near-IR spectroscopy with Keck, LBT and Magellan. The luminosities of these lines are substantially less than what the far-IR derived star formation rates predict, suggesting that these DSFGs have large dust attenuations. The difference in the star formation rates is a factor of 30 x (AV= 4), which is larger than previously reported for DSFGs at z > 1. One galaxy (z = 1.5) in the sample showed the largest suppression with a factor of 550x (AV = 7), which is similar to local ULIRGs. Future prospects: Herschel provided a glimpse into the star formation of DSFGs, but only the brightest at z > 2 could be studied in detail without gravitational lensing. ALMA will revolutionize the study of DSFGs with its high spatial resolution submm/mm imaging of their dust continuum and molecular gas, and it will begin to unravel their physical properties. In order to detect nebular emission lines in fainter higher redshift sources, 20-30 meter class telescopes, with next generation near-IR spectrographs, will be necessary. JWST will play a significant role as it will target rest-frame optical nebular emission lines in DSFGs unobtainable from the ground as well as weaker Hydrogen series lines (such as Paschen and Brackett series) to better understand their instantaneous star formation and dust attenuation.