COPISA in Ecuador: Participation that Wasn't 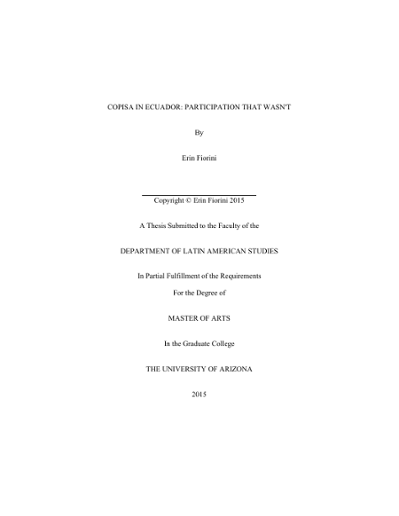 Ecuador codified participatory democracy and food sovereignty in its 2008 constitution. It also called for the creation of a food sovereignty bill to expand and detail legal protections for these valued practices. In 2009, legislators proposed a bill to the president. It called for indigenous and peasant farmers' increased access to state agricultural resources, such as land and loans, and the ability to direct national government agricultural policy. In essence, legislators wanted to democratize Ecuador's agricultural economic model, one that had long marginalized peasant farmers who grow traditional crops for local markets, and had favored the production of large-scale commodities for export. To accomplish this, they also included within the bill the creation of a power-sharing participatory institution, the National Council for Food Sovereignty, an institution first proposed by the food sovereignty-focused organizations Mesa Agraria and Colectivo Agrario. The institution would comprise a council of representatives from small-scale producer and indigenous organizations as well as state actors who would jointly create national agricultural policy and ensure its implementation. Legislators wanted the council to increase peasant farmer authority in agricultural policy, to establish policy that would enable more egalitarian agricultural production and consumption systems, and to oversee the state's completion of such policy. Legislators and civic groups anticipated that President Rafael Correa, who in his 2006 campaign promoted citizen participation and equitable distribution of agricultural resources, would support such a participatory council. He did not. Instead, Correa partially vetoed the bill. He restructured the institution into a temporary committee and later a permanent state agency, Plurinational and Multicultural National Conference for Food Sovereignty (COPISA), which was mandated to create supplemental food sovereignty bills with citizen participation. COPISA completed the task in 2012, but their bills have yet to become laws. COPISA claims to be a leader in creating food sovereignty policy with citizen participants and to enable their implementation; however, findings show differently. COPISA is a relatively weak state agency. The agency has yet to redistribute power or resources regarding food sovereignty or oversight of existing food sovereignty legislation. Instead, the Correa administration (2007-present) has monopolized agricultural policy decisions and exponentially increased government investment in commodity crops, to the exclusion and detriment of peasant farmers. Indeed, the Correa administration seems to monopolize several supposedly state-sponsored "participatory" platforms, to the detriment of Ecuador's democracy. This text investigates why and how COPISA was restructured into a weak state agency, the perils of COPISA's claim of being a participatory organization, and the ways that its status as a weak state agency impacts and reflects Ecuador's participatory politics, democracy, and agricultural economies.