Kent A. Newbury: A Study of His Choral Works 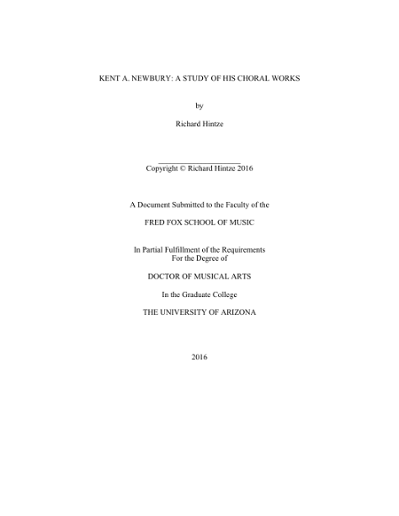 Kent Alan Newbury is an American composer who was born in Chicago in 1925, and currently resides in Scottsdale, Arizona. He has composed over 550 works and has had 282 choral works published. His first published piece was Psalm 150 (1955) and his latest publication was Praise the Lord, All Ye People (2013). Thirty-nine of his published choral pieces are still in print. At this time, the unpublished manuscripts include 204 choral pieces, four solo works, four instrumental works for dance, thirty-seven brass or band works, six woodwind pieces, and nineteen string or orchestra works. Newbury's complete catalog is included as Appendix B. During his Initial Period (1955-1965), Newbury had eighteen pieces published. In his Developmental Period (1966-1985), 247 pieces were published. That is an average of twelve pieces published per year. During his Mature Period (1986-present), he has had seventeen pieces published. This is the first published work documenting Newbury's life and music. It is hoped this study will introduce more choral directors to Newbury's music and encourage the performance of his music by more college, church, and school choirs. Analysis of Newbury's published choral works reveals the consistent inclusion of four stylistic traits: syncopation, text painting, parallelism, and textural layering. This study demonstrates how the use of these stylistic traits develops through his compositional career, both in terms of the frequency of usage and the progression of the technique. Syncopation is plentiful throughout Newbury's three periods. Syncopation and rhythmic displacement are found in 37% of published pieces in his Developmental Period and in 100% of published pieces in his Mature Period. The syncopation ranges from simple to complex, and it is sewn into the inner fabric of his compositional style. Text painting is used a great deal in Newbury's Initial Period, but the frequency diminishes in his later periods. Instead, he approaches his composition as he is inspired by the text, and the music reflects the text, in its totality if not in detail. Parallelism is a favored stylistic trait. Newbury composes with parallel fifths and fourths, and parallel chords moving in similar motion (planing) as well as contrary motion (the omnibus progression). Despite his teachers' objections to the use of parallel fifths, this is a consistent element throughout his career. Textural layering is a technique in which notes are added or repeated to call attention to the text or to build harmonic structures. As with text painting, the frequency of usage is most prevalent in his earlier periods.