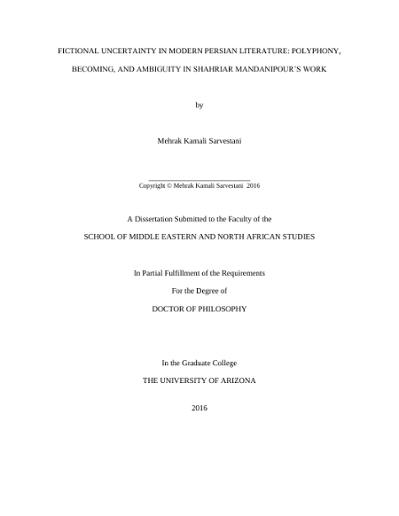 Fictional uncertainty is a complex technique that utilizes literary devices such as changing points of view, multiple themes, and fluid characterization. Fictional uncertainty enables an author to create a layered narrative based upon multiple perspectives and a deep look into the characters' individual personalities and inner lives. Every work of fiction involves some amount of uncertainty, but in modern Iranian literature there was a distinct transition in the late twentieth century from greater realism to greater uncertainty. Indeed, the mode of fictional uncertainty is central to Iranian authors' modernist project, focused as it is on the psychological aspects of the charterers' lives and narrative aesthetics. Fiction prior to the 1979 Islamic Revolution usually focused on sociological matters, but post-revolution modernist fiction has been distinguished by emphasis on the deeper realities of characters' individual lives. Fictional uncertainty is the most significant literary technique that authors have used to portray the complexity of Iranians' post-revolutionary experiences. It has provided a tool for a number of Iranian writers to oppose the dominant social, cultural, historical, and religious certainties of post-revolutionary Iranian society. Shahriar Mandanipour, one of the greatest users of this technique, has extended the boundaries of Persian fiction through his experimental fiction. Although Mandanipour does count some traditional realist fictions among his works, his efforts in applying fictional uncertainty make him unique and exemplary. Under the influence of Russian Formalism, Mandanipour mostly uses his content as a pretext for formalist fictional experiments. Mandanipour's focus on "literariness" is the basis of his interest in the technique of fictional uncertainty and his understanding of the essentiality of "form" in fictional works. Fictional uncertainty is not always guided by one particular ideology or discourse, but rather by the ways in which devices such as changing points of view, multiple themes, fluid characters, and unstable settings function in the text. In the case of post-revolutionary Persian literature, fictional uncertainty has also provided authors a way to investigate and recreate the complex dynamics of revolutionary and post-revolutionary life, which is to some extent ultimately related to ideology and discourse. A close reading of Mandanipour's short stories and novels will show that his application of fictional uncertainty is related to the Bakhtinian concepts of "polyphony, dialogue, unfinalizability" and becoming, which are embodied in the plots, characterizations, and points of view in his works. Using these fictional devices, Mandanipour portrays an atomized Iran full of violence, despair, fear, infidelity, revenge, and loneliness. However, his works go far beyond Iran as a historical nation-state and discuss a number of universal subjects like love, death, loneliness, and revenge by application of the technique of fictional uncertainty.