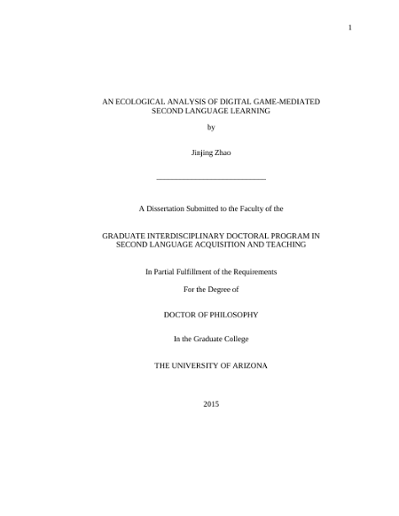 As digital games have grown into a global cultural force during the last few decades, computer-assisted language learning (CALL) researchers and second and foreign language (L2) educators have begun reconsidering games as potential L2 teaching and learning (L2TL) resources (Reinhardt, in press). One particular game genre, massively multiplayer online role-playing games (MMORPGs) have gained particular attention among CALL researchers and L2 educators. MMORPGs distinguished themselves from earlier game genres in their ability to allow players to cooperate and compete with each other on a large scale, even around the world. They are perceived to offer the opportunity for a great deal of contextualized interaction in a learner's target language, including interaction with native speakers (Peterson, 2010). Participating in MMORPG playing could promote social-interactional language use (e.g. Peterson, 2012a, 2012b; Rama et al., 2012; Zheng et al. 2012), sometimes even intercultural interactions (e.g. Thorne, 2008), and L2 learner's willingness to communicate (Reinders & Wattana, 2014). In addition to player-to-player communication, the texts embedded in MMORPGs and the texts circulated in the player communities online illustrate multiple genres, complex structures, and features of interactive discourse (Thorne, Fischer & Lu, 2012). MMORPGs seem to present a diverse and linguistically complex environment for L2 learners. However, empirical research on how L2 learners engage with a variety of game discourses in MMORPG playing is still limited. In an attempt to better understand how MMORPG playing can be used to enhance L2TL, this dissertation examines L2 learners' engagement with game discourses within and around a MMORPG. Grounded within an ecological framework of language learning (van Lier, 2004), this dissertation investigates the interaction of game-learner-context through a mixed method approach, including quantitative (e.g. survey) and qualitative (e.g. case study) methods. Through analysis of the languaging patterns of eight ESL learners who played a MMORPG for eight weeks, the study seeks to understand how game mechanics, learner agency, and practices of the player community influence L2 learner-players' engagement with a variety of game discourses. Findings show that these L2 learner-players, with diverse backgrounds in language learning and digital gaming, engaged with a variety of game discourses as they played the MMORPG. Their engagement with game discourses was greatly influenced by the game mechanics and their personal goals in the game. Comparison of the languaging patterns of two learner-players further reveals the individual variations of game-mediated L2 languaging, which can be attributed to learner-player's L2 ability, gaming experience, gaming preference, L2 learner status, and the social norms of the player community. Taken as a whole, the study points to the significance of game-learner-context interplay in shaping game-mediated L2 language learning and use. It has implications for using MMORPGs in L2LT, designing MMORPGs for language learning, and the nascent field of game-mediated L2LT research.