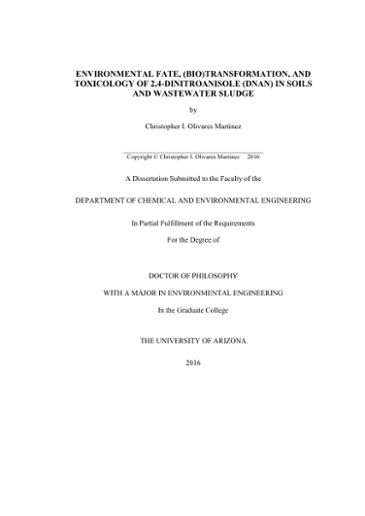 Insensitive munition compounds (IMC) are an emerging class of explosives that are less susceptible to accidental explosions compared to the conventional explosives they will be replacing. An IMC that has been incorporated in several explosives formulations is 2,4-dinitroanisole (DNAN). As the manufacture, storage, and use of these compounds increases, the expected releases in natural and engineered systems might pose an environmental hazard to public health and ecosystems. To date there is little information on the environmental fate and toxicology of DNAN. However, nitroaromatic compounds are known to be toxic, mutagenic and difficult to completely biodegrade. In order to study the fate and (bio)transformation of DNAN, microcosm studies with soils and anaerobic wastewater sludge were performed to determine (bio)transformation pathways and key factors influencing (bio)conversion. Transformation was enhanced in anaerobic conditions, in particular when exogenous electron donor was added. Abiotic transformation (in heat-killed soil) was also significant and dominated transformation reactions in soils that were not amended with exogenous electron donor. The organic carbon content of soils was a key factor that correlated to the anaerobic biotransformation rate. Having identified (bio)transformation products using liquid chromatography coupled to quadrupole time-of-flight mass spectrometry, an overall pathway of (bio)transformation was devised and consistent with nitro-group reduction to form aromatic amines. During the nitro-group reduction, reactive products (e.g. nitroso-intermediates) coupled with amines to form azo-dimers and oligomers. Subsequent transformation pathways included N-alkylation, N-acetylation, and stepwise demethoxylation of these oligomers. The assessment of the toxicity of DNAN and its (bio)transformation products was performed utilizing microbial toxicity assays and ecotoxicity evaluation with zebrafish (Danio rerio) embryos. Overall DNAN severely inhibited methanogens (IC₅₀ = 41 μM ), the bioluminescent marine bacterium Aliivibrio fischeri utilized in the Microtox test (IC₅₀ = 57 μM), and nitrifiers (IC₅₀ = 49 μM). Reduced aromatic amine products in general were less toxic than DNAN with the exception of 2-methoxy-5-nitroaniline and 3-nitro-4-methoxyaniline, which were similar in toxicity to some of the test organisms as DNAN. Azo-oligomer surrogates were as toxic or more toxic than DNAN, although at trace levels they significantly stimulated activity. N-acetylated amines were found to have by far the lowest toxicity to microorganisms. In zebrafish embryos, the (bio)transformation product or surrogates 3-nitro-4-methoxyaniline and 2,2'-dimethoxy-4,4'-azodianiline caused developmental abnormalities (each with lowest observable effect level of 6.4 μM). An integrated approach which monitored (bio)transformation product mixture profile in parallel with their toxicity to microbial and zebrafish toxicity was used to characterize toxicity during the time course of the anaerobic (bio)transformation of DNAN. Enhanced inhibition of methanogenic activity and zebrafish mortality were associated with the onset of dimer formation indicating they were being mostly impacted by reactive intermediates formed early in the biotransformation of DNAN. Further accumulation of oligomers was associated with a decrease toxicity. On the other hand, A. fischeri bioluminescence became more and more inhibited as the oligomers formed, indicating different responses depending on target organism. Taken globally, the results indicate that DNAN can be readily transformed in soils and wastewater sludge forming both highly toxic (e.g. azo-oligomers) and non-toxic intermediates (e.g. N-acetylated 2,4-diaminoanisole). Depending on target organism, the prolonged formation of oligomer mixtures either resulted in detoxification or recovery of activity.